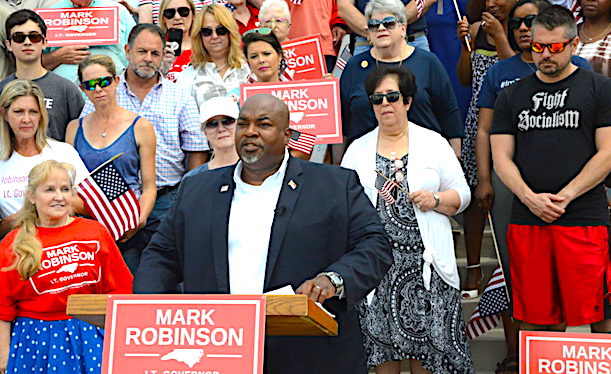 An array of North Carolina Jewish figures and the Republican Jewish Coalition have called on North Carolina’s lieutenant governor to apologize for daring to raise the question of how Jewish power may be destroying Black people in America:

Jewish Insider on Friday quoted a number of Jewish officials who were appalled by Mark Keith Robinson’s comments on Jews and their influence. Robinson, a Republican, has said he will not apologize for things he said before he became an elected official.

“His refusal to apologize is troubling and unacceptable to us,” said Matt Brooks, the director of the Republican Jewish Coalition. “These kind of comments have no place in our society.”

Typical of the reactions of North Carolina’s Jews was Rabbi Lucy Dinner of Temple Beth Or in Raleigh. “I believe that Mark Robinson’s election in North Carolina is, as we would say in Yiddish, a shanda,” she told Jewish Insider.

Among Robinson’s offenses was an attack in 2018 on the creators of the Black Panther character, after a movie about the Marvel Comics superhero came out.

“It is absolutely AMAZING to me that people who know so little about their true history and REFUSE to acknowledge the pure sorry state of their current condition can get so excited about a fictional ‘hero’ created by an agnostic Jew and put to film by satanic marxist,” said Robinson, who is African American, in a Facebook post.

“How can this trash — that was only created to pull the shekels out of your Schvartze pockets, invoke any pride?” he added, a Yiddish pejorative for African Americans. “Shekels,” the name of the Israeli currency, is often used in anti-Semitic literature.

Black Panther was created in the 1960s by two Jewish comic book creators, Stan Lee and Jack Kirby. The 2018 film was directed by Ryan Coogler, a Black filmmaker who is involved in social justice causes.

In October, the Raleigh News & Observer found a conversation that Robinson had in 2019 with a fringe religious leader named Sean Moon. In the interview, Moon invokes anti-Semitic tropes about the Rothschild family, and Robinson says “That’s exactly right.”

The state and national Republican parties have so far been silent about Robinson. Robinson has become a hero on the right for his unapologetic stand in taking on the left in culture wars. The conservative Washington Free Beacon recently ran a flattering profile entitled “North Carolina’s First Black Lt. Gov. Leads Fight Against Radical Curriculum.”

Yes, Mark Robinson appears to have officially left the Jewish-Democratic Plantation which has enslaved Blacks for at least the last 100 years, and he is not apologizing for it — at least not yet.

And he seems to be far more aware of what is really going on in America than even most White people — in a 2019 interview he clearly spelled out the obvious connection between the Rothschilds, Marxism, and the New World Order — and pointed out correctly that Christians are in their crosshairs.

Robinson has put the Jews of North Carolina literally “on high alert”  as if he’s the second coming of Adolf Hitler — how dare he grow up in poverty— one of nine children — and then turn around and not become a welfare cheat, a rapper, or a career criminal who blames White people for all his failings?

But from a Jewish perspective, perhaps they do have reason to be “appalled” by Robinson — after all, Robinson’s ancestors were likely brought to America on Jewish-owned slave ships, and since over 30% of Jewish households in the South owned slaves, it’s quite possible that some of his ancestors were literally owned by Jews.

After helping enslave Blacks, Jews went on to “liberate” them by dominating the Civil Rights movement — and even formed and ran the NAACP on behalf of the Blacks because Jews apparently felt that Blacks — or shvartze — were incapable of doing it themselves — or at least, doing it the way Jews wanted them to do it — under the guise of Marxism.

And then Jews enthusiastically endorsed LBJ’s “Great Society” — which was based on Jewish writer, Walter Lippmann’s book The Good Society — where Blacks became bribed with incentive-killing welfare that created inter-generational dependency on Jewish largesse — in return for the predictable Black vote for every kosher-certified Democratic candidate.

Jews were instrumental in grooming the communist Martin Luther King as their preferred “great” Black leader — and when he became a liability by supporting the Palestinian cause, they had him taken out — and blamed his assassination on a White Southern “racist” to further stoke racial tensions in America.

So, after all this effort on behalf of Blacks, yes, Robinson’s election is indeed a “shonda” — the Yiddish term for a “shame” — but curiously it’s a term usually reserved not for the goyim, but rather for a “Jew or Jewish group that leads to embarrassment among the broader Jewish community.”

Does this mean that the Jews regret supporting Robinson’s election?

And does it mean that Jews in North Carolina are indeed powerful enough to get someone like Robinson elected — simply because he’s Black — and then live to regret it?