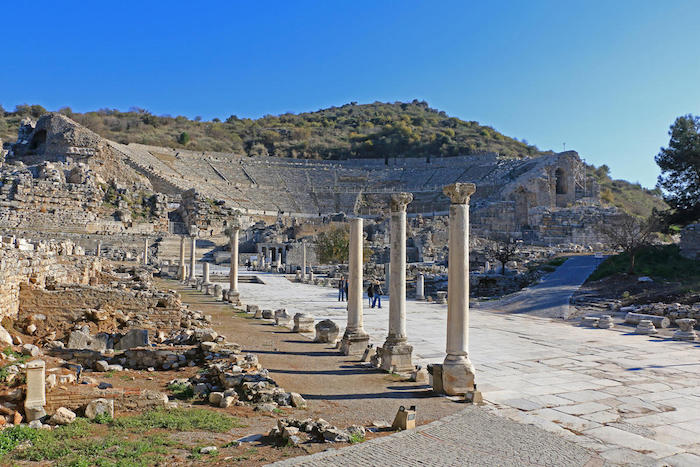 Archeologists have uncovered a number of significant artifacts in support of Luke’s account in the Book of Acts of how the silversmiths in Ephesus incited a riot in protest of Paul’s early Christian teachings there:

According to Acts 19:8-10, the apostle Paul spent more than two years in Ephesus during the A.D. 50s. Situated near the coast of today’s Turkey, Ephesus was a significant seaport at the time. It was also the capital of Roman Asia, with a population of roughly 200,000 (which ranked it among the largest cities of the Roman Empire). Accordingly, it provided an excellent base of operations for Paul’s apostolic ministry.

According to Acts 19:23-41, a wealthy silversmith in Ephesus named Demetrius conjured up a riot against Paul and some of his missionary associates. Their preaching, said Demetrius, attuning his rhetoric to traditional Ephesian values as well as to Ephesian fears and insecurities, was a threat to the wealth and prestige of the great temple of Diana or Artemis — which, according to most ancient lists, was one of the Seven Wonders of the World. Not coincidentally, it was also a threat to the income of local silversmiths, who sold “silver shrines” of the goddess to the many pilgrims who visited that temple. Paul, though, dangerously taught that “they be no gods, which are made with hands” (see Acts 19:26).

“Enraged,” says the Western text of Acts (which is approximately 10 percent longer than the Alexandrian text that modern translations typically use), Demetrius’ audience “ran into the street.” Others, perhaps not even understanding what was afoot, joined the mob, which grabbed some of Paul’s companions and hauled them into the theater.

In 1984, a 3.5-foot monument was discovered on the street that connects the theater of Ephesus with the city’s ancient stadium. Dating to the late second or early third century, the monument was dedicated to one Valerius Festus by the guild of Ephesian silversmiths — the very group that, slightly more than a century before, had played a central role in the riot described by Luke in Acts 19.

The inscription on the monument contains language that’s reminiscent of the account in Acts. When, for instance, in Acts 19:35, the “townclerk” (as the King James Version calls him) speaks of Ephesus as the “temple keeper” or “temple guardian” (King James: “worshiper”) of the goddess Artemis (King James: “Diana”), he uses a Greek term (“neokoros”), almost unique to Ephesus, that also appears in the silversmiths’ monument.

The King James phrase “certain of the chief of Asia” (Acts 19:31) translates an original Greek clause (“certain of the Asiarchs”) that uses a word (“Asiarkhoi”) found nowhere else in the New Testament but prominent in inscriptions throughout the ruins of Ephesus. One of the “Asiarchs” appearing in the inscriptional evidence is also called a “secretary” or “grammataeus,” which is the same word that Luke uses in Acts 19:35 for the “townclerk” (as the King James translation renders it) who manages to still the crowd and dismiss them from the theater.

This “grammateus” warns the mob against their unlawful assembly (19:32, 39, 40), using the word “ekklesia.” Everywhere else in the New Testament, “ekklesia” means “church.” Here, though, it conveys the classical Greek sense of a secular meeting, just as we might expect a pagan Roman official to use it.

In 1890, William Ramsay, a leading authority in his day on the history and geography of Asia Minor, argued (refuting a critic who dismissed Acts 19 as fiction) that Luke’s account of Paul’s riot is “vivid and true to the situation and surroundings.”

Today, says Edwards, Ramsay’s words are even more justified. And Luke’s claim to have thoroughly investigated what he recounts in Luke-Acts passes yet another test.

It’s remarkable how many of the events described in the New Testament, which have been dismissed as fiction at one time or another, have turned out to be confirmed by objective archeological evidence.  And yet the scoffers continue to look for even the smallest pieces of evidence to undermine its integrity.

If the New Testament were fiction, it would have been proven to be so by now — after two thousand years of investigation.  And there is a huge financial incentive to prove it false — especially by the well-funded jewish archeologists who would become world-famous for proving that the story of Christ and His followers was false.

The Jew who could prove Christ to be a fiction would become a jewish messiah — the hero who hands the world to the Jews on a silver platter.