Are High-Dose Flu Shots Marketed Toward The Elderly A Silent Method Of Euthanasia? 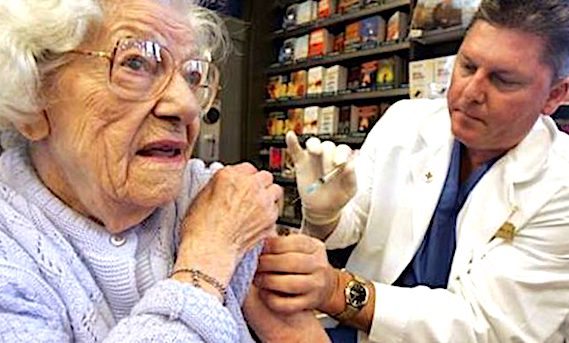 People 65 and older are typically advised to get a higher-dose flu vaccine, but this year, seniors across the country have to wait longer to get it as partial shipments have been delivered to clinics and pharmacies, while the higher-dose vaccine won’t arrive in large quantities until mid- to late November:

Vaccines typically start showing up at clinics and pharmacies between July and September.

The vaccine’s manufacturer, Sanofi Pasteur — the only company that makes the higher-dose flu shot — opted to wait to see which strains of flu are circulating this year in order to better match the vaccine to those strains.

Seniors who prefer not to wait can still get the standard flu shot, and should do so if the higher-dose vaccine isn’t available near them, said Dr. John Dunn, medical director of preventive care for Kaiser Permanente Washington.

“The most important thing is to get vaccinated,” he said. “Everything on top of that is just gravy.”

Spokespeople for both Bartell Drugs and Walgreens said their pharmacies will be getting full shipments beginning mid-November.

This year’s flu season, to this point, has been mellower than prior years, according to tracking data from Public Health — Seattle & King County. As of Oct. 26, no new influenza outbreaks or deaths were reported. Since the end of September, one person has died of the flu at a long-term care facility.

The stronger flu vaccine, which is made with four times the antigens of other vaccines on the market, is a relatively new option. The U.S. Food & Drug Administration approved it at the end of 2009, and it was first available for the 2010 flu season.

The Centers for Disease Control and Prevention suggests that almost everyone older than 6 months should get vaccinated every flu season.

In fact, over 100 seniors died after taking part in the clinical trials for the high-dose flu shot, which makes its promotion among the elderly even more suspicious and nonsensical.

And, yes, the medical establishment knows there is an increased risk of stroke in the elderly because of flu shots, but they attempt to hide that risk and muddy the waters by blaming other “pre-existing conditions”.

A few years ago, there was a scandal at a nursing home in Georgia when 5 elderly residents died right after receiving their annual flu shots, but that story has been all but scrubbed from the internet.

So the authorities know the regular flu shot was killing seniors, so they made it even stronger, despite their own admission that there’s no scientific proof that the stronger dose is more effective in fighting the flu.  But then again, maybe it’s more effective in inducing stroke, which would make it successful in a completely different sense: euthanasia.

The Medicaid and Medicare savings alone could run in the billions if you’re looking for a motivation.