Are Yellow Vest Riots in France an Unwitting Pogrom Against Their Jewish Oligarchs? 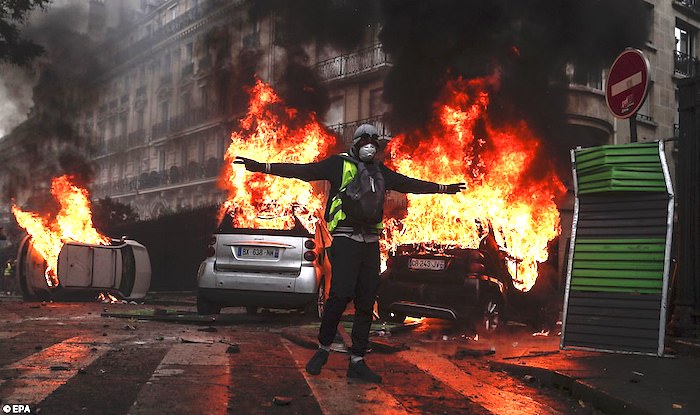 France is being systematically destroyed under the ruinous policies of the jewish oligarchs who have had a stranglehold on France since the end of World War II, and now the frustrated French populace has taken to the streets to show their anger and frustration at what’s being done to their country by this face-less adversary:

Prime Minister Edouard Philippe has been asked to meet protest organisers and party leaders as part of a “constant wish for dialogue,” the Elysee Palace said.

Environment Minister Francois de Rugy met representatives of the “yellow vests” last week but failed to convince them to end the protests.

The government has not ruled out imposing a state of emergency to combat the protests, which began over fuel taxes but have grown into wider anger over Macron’s agenda.

The president earlier assessed the damage at the Arc de Triomphe, the massive monument to France’s war dead at the top of the famous Champs Elysees avenue, where rioters scrawled graffiti and ransacked the ticketing and reception areas.

Inside, rioters smashed in the iconic face of a sculpture, a partial reproduction of the victory allegory “La Marseillaise” by Francois Rude.

Macron also saw the wreckage of burnt-out cars and damaged buildings from rioting at other sites, where he praised the police but was also booed by sections of the crowd.

Paris police said 412 people were arrested on Saturday during the worst clashes for years in the capital and 378 remained in custody.

A total of 263 people were injured nationwide, with 133 injured in the capital, including 23 members of the security forces.

“I will never accept violence,” Macron said. “No cause justifies that authorities are attacked, that businesses are plundered, that passers-by or journalists are threatened or that the Arc du Triomphe is defiled.”

Overnight a motorist died after crashing a van into traffic which had built up due to a “yellow vest” demo in Arles, southern France, a local prosecutor said Sunday. Three people have now died in incidents linked to the protests.

The anti-government protests that have swept France were sparked initially by a rise in taxes on diesel.

In Paris on Sunday as groups of workers set about cleaning up the mess from the previous day, the scale of the destruction became clear.

Around famous areas including the Champs-Elysees, the Louvre museum, the Opera and Place Vendome, smashed shop windows, broken glass and the occasional burned-out car were testament to the violence.

Dozens of cars were torched by the gangs of rioters, some of whom wore gas masks and ski goggles to lessen the effects of tear gas which was fired continually by police.

Prior to being “elected” as President of France, Emmanuel Macron worked for the most powerful jewish bankers in France, the House of Rothschild.  He obviously gets his marching orders from them, which has made him among the most unpopular presidents of France in modern history.  The French people are fed up with an incompetent government and economy that is constantly on strike, while the country is drowning in unchecked migrant crime and welfare cheats.  Paris is burning once again in protest against the ruinous policies of their jewish overlords whom the media protects behind a veil of secrecy.

Of course, the jewish media is portraying these riots as protests against certain economic policies, but what is really happening is a popular uprising against their un-named jewish overlords, just as the Hungarian Uprising of 1956 was portrayed as a protest against the “communist” rule when, in fact, it was an actual pogrom against the jewish commiunist overlords who brutally controlled Hungary, a fact that only British historian, David Irving, has ever written about.  The parallels between Hungary and France today are uncanny.  Irving discusses his book here: