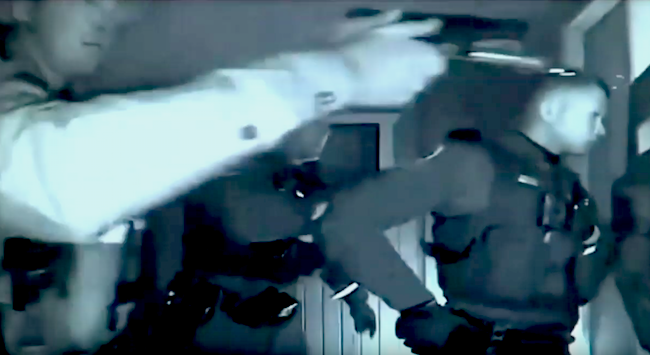 After police officers busted down the door of a Chandler home to take a toddler with a spiking fever from his parents, advocates and a state legislator are questioning if a new law intended to protect families’ rights is failing:

Officers pointing guns forced their way into the family’s home in the middle of the night last month after the Arizona Department of Child Safety called police for a welfare check on a child with a 100 degree-plus fever and no vaccinations.

The parents had ignored a doctor’s recommendation to take their 2-year-old to the hospital, saying their son’s fever had decreased.

Rep. Kelly Townsend, R-Mesa, who helped craft legislation requiring DCS to obtain a warrant before removing a child from their parents or guardians in non-emergency circumstances, said she was outraged by the response of police and DCS officials in the case.

“It was not the intent (of the law) that the level of force after obtaining a warrant was to bring in a SWAT team,” Townsend said. “The imagery is horrifying. What has our country become that we can tear down the doorway of a family who has a child with a high fever that disagrees with their doctor?”

DCS officials did not respond to The Arizona Republic’s questions about their policies for child-welfare checks and warrants, or whether their handling of this family’s case was in line with those policies…

“What about parents’ rights to decide what’s best for their child?” Townsend said. “Parents felt the child was fine. Next thing we know, the Gestapo is at their door.”

The case has made its way to a juvenile court room and sparked conversation over the balance between parental rights to care for their children versus the power of DCS and doctors.

It could take months of hearings and DCS-mandated instructions before the parents regain custody of their children. Or maybe they never will.

The State wants complete control of your children, and it will use so-called Child Protective Services to take your children from you on the flimsiest of pretexts, such as an unvaccinated child who happens to have a fever.  This case is so surreal that it has the signposts of being a government psy-op, a test case to see how the public reacts to this unconstitutional search and seizure.  If the public doesn’t protest too much, and the family doesn’t sue, then perhaps the authorities will be emboldened to do it again.

However, there can be little doubt that this kidnapping never would have happened had the child been vaccinated.  A parent who opts out of vaccinating his/her child automatically is a criminal in the eyes of the State, and will be treated as such.  Instead of calling CPS on the family, the doctor could have called the parents directly to check on the status of the child, but clearly he had an agenda.  And the fact that this doctor is a naturopath, who are generally tolerant of unvaccinated children, makes his actions all the more suspicious.