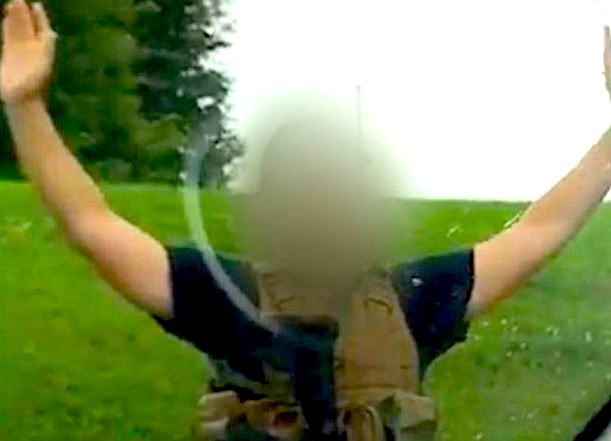 Exact details of the incident are still under investigation, but police in Springfield, Missouri, arrived at the local Wal-Mart as a courageous bystander, apparently an off-duty fireman holding a concealed carry permit for his firearm, was holding the threatening shooter at gunpoint and given credit for stopping the suspect, Dmitriy Andreychenko, a 20-year-old white male, from carrying out a potential mass killing just five days after two horrific mass shootings took place across the country:

“[H]is intent was not to cause peace or comfort to anybody that was in the business,” Springfield police stated about the would-be shooter, according to KOLR 10 TV. “In fact, he’s lucky to be alive still, to be honest.”

The suspect’s actions have all the indications of preparing for a lethal shooting spree, as he was armed with what appeared to be an AR-15 rifle – and clad in full body armor.

“Andreychenko started recording himself with his cellphone while still in the parking lot of the Springfield Walmart on Thursday afternoon,” Fox News reported. “He got the body armor from the trunk of his car before grabbing a shopping cart and walked into the store, the probable cause statement said.”

Walmart management did all it could to avoid mass casualties and vacated customers from the store immediately.

Legally-armed citizens in America stop just as many violent crimes as police do, including potential mass shootings.  In fact, you are far less likely to die in a mass shooting if there are people around you who are carrying legal firearms, but the media has an unmistakable habit of ignoring any story involving the social benefits of private gun ownership.  Even the police benefit from private gun ownership because the entire burden of preventing violent crime doesn’t fall into only their laps.

Regardless of reality, not only are the Bolsheviks intent on disarming law-abiding Americans, their leading gun-grabber in the Senate, Chuck Schumer, who “just so happens to be jewish,” now wants the FBI to restrict our right to own body armor which helps us survive a mass shooting.  Schumer is actually suggesting that because a small fraction of mass shooters use body armor, that no one else, except those approved of by the FBI should be able to own it, such as Schumer himself and his armed body guards.