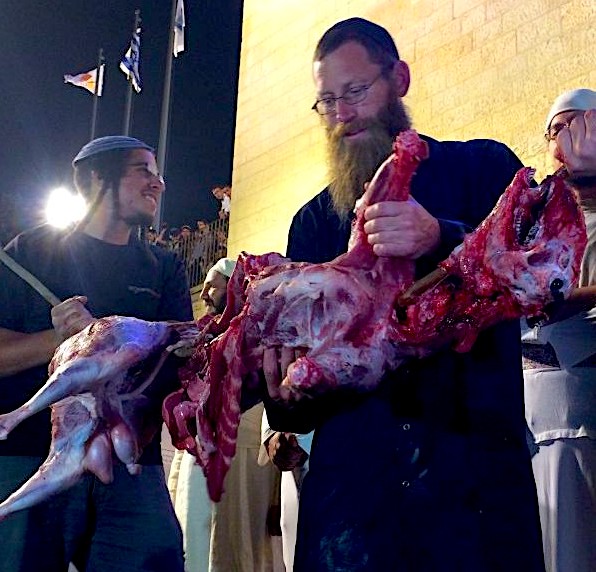 Israeli police arrested Jewish activists from the Hozrim LeHar (Returning to the Mount) organization early Friday afternoon, after an attempt to bring a young goat onto the Temple Mount for a Passover sacrifice:

Undercover police officers nabbed several activists as they carried the kid goat, holding them until additional officers could take the activists into custody.

Shortly afterwards, a number of Israeli civilians confronted police at the scene to protest the arrests. Witnesses say the undercover police officers refused calls by activists to show police identification.

In a statement released Friday afternoon shortly after the arrests, the Hozrim LeHar organization condemned the officers’ behavior.

“It is unacceptable that Jews are not allowed to observe basic religious commandments in the Jewish state, which was established exactly for that purpose.”

“Certain” Jews want to destroy the mosque on the Temple Mount, replace it with their own “third temple”, and then start sacrificing animals on the altar, and these Hozrim LeHar activists are on the avant-garde of that messianic drive to reinstate the sacrifice.  The Israeli police are told to arrest them merely to keep the peace and stop the Muslims from rioting, not because they really object to what they are doing.

After all, it’s been over 2,000 years since their temple, built by their Edomite King Herod, was destroyed by the Israelite Romans, and so it’s been over 2,000 years since they’ve had a temple sacrifice.  Apparently, they believe if they can sacrifice goats on an altar that their “God” will grant them favors of one sort or another.  Perhaps if they sacrifice enough animals, they can convince their “messiah” to come and rule the world from the seat of judgment in Jerusalem.  Or perhaps they can merely incite a global military conflict by trying make this all happen.