4th C. Artifact Found in Spain Reveals Early Christians May Not Have Believed Christ Was a Jew 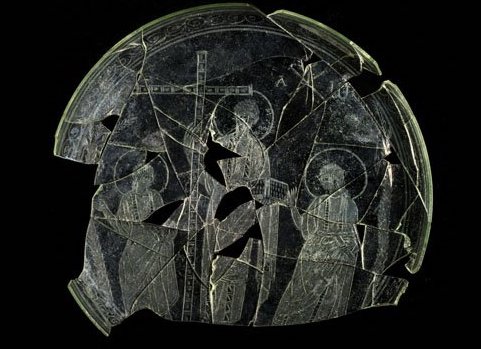 In 2012, a team of archeologists headed by Marcelo Castro of the Forum MMX excavation project unearthed a 4th century glass plate in southern Spain which depicts Jesus Christ and his disciples atypically as beardless with closely cropped heads:

One of the world’s earliest representations of Christ has been unearthed in southern Spain by a team of archaeologists, a glass plate which shines new light on the arrival of Christianity in Spain.

The green glass paten, the plate which holds the Holy Eucharist in churches, is the earliest depiction of Jesus found in Spain and is in excellent condition compared to similar pieces discovered around Europe.

“We know it dates back to the 4th century, in part because popes in the following centuries ordered all patens to be made out of silver,” Marcelo Castro, head of the Forum MMX excavation project, told The Local.

The team of archaeologists have so far managed to find 81 percent of the paten at the site of a religious building in Cástulo, an ancient Iberian town in the province of Jaén, Andalusia.

Measuring 22 centimetres in diameter, it shows three beardless men with short hair and halos over their heads.

According to Castro, the figures are Jesus and the apostles Paul and Peter as depicted in Christ in Majesty, an early Christian art form which copied Roman and Byzantine styles.

The Forum MMX team have been able to establish the paten was made in the 300s thanks to coins and ceramic objects found at the same site.

“We were wary about presenting the paten as a 4th century piece in case it clashed with previous studies into the chronology of Christianity in Spain,” Castro explained.

But their estimates coincide with the rule of Constantine, the first Roman emperor to claim conversion to Christianity, who also ensured the religion’s clandestine followers were no longer persecuted.

The paten was put on display on Wedneday at the Archaeological Museum of Linares (Jaén), alongside other ancient pieces such as a mosaic of Cupid (Mosaico de los Amores), unearthed in 2012 and named as one of the discoveries of the year by National Geographic.

It is remarkable that none of these so-called experts draw the most obvious conclusion from this early depiction of Christ and his followers — that whoever created this glass plate did not believe that Christ was a Jew.  Had they truly believed that Christ were a Jew, He would have been depicted with a beard and long, unshorn hair, as all later depictions of him attest.  The fact that he is beardless is not insignificant — the artisan who carved this glass icon depicted Jesus this way to make a religious statement about how early Spaniards saw Him.

Jews, and especially rabbis, did not shave their beards or cut their hair short — in their vain attempt to follow the rituals of The Law laid out in Leviticus.  Had these early Spaniards believed that Christ was a jewish rabbi, as many of today’s misled Christians still believe, they would have most certainly depicted him with a beard.

And it’s highly doubtful that they would have depicted Christ without a beard simply because beards were not “fashionable” in 4th century Spain.  To depict Christ without a beard would have been disrespectful and even blasphemous if these early Christians truly believed He was a Jew.  Rather what we are seeing here is much more likely how early Christians understood Christ, and even more significantly, how Christ would have seen Himself.