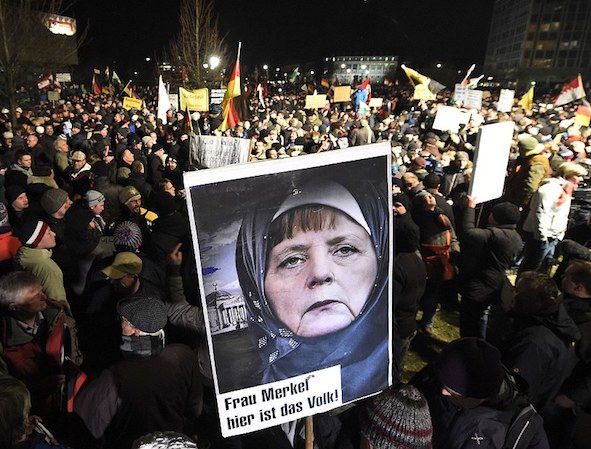 After a violent attack of four refugees, the German town of Amberg is still in shock, news outlet Focus reports.

As Voice of Europe reported earlier, the refugees chose victims in the town centre then kicked and beat them with serious consequences, as nine people were hospitalised.

According to the data, the suspects were under the influence of alcohol when they attacked people on Saturday night.

Several people fled in panic from the attackers and entered a shop at the local station. A saleswoman, who locked the doors said: “People immediately told me that they were attacked, everyone was scared.”

“Such people do not deserve to be here,” the saleswoman angrily added.

A manager of a restaurant who helped a harassed girl was attacked as well, receiving a headbutt from the men. A friend of his was hit in the face.

Twelve people were injured on Saturday night and nine had to be hospitalised. The four refugees, aged 17-19 are in custody.

At this point, Merkel cannot be characterized as “naive” or “out of touch”; her insistence on continuing Third World immigration and “tolerance” of those who wish to destroy Germany is nothing less than sadistic and intentionally destructive.  She knows what she’s doing, and she knows from whom she takes her orders.  For the last 100 years, during which Germany suffered under two World Wars, there has been a concerted and ongoing effort to destroy Germany.  What two World Wars could not accomplish, mass Third World immigration will potentially finally finish.

As the jewish writer Theodore Kaufman wrote prior to the outbreak of World War II, Germany Must Perish!  Keep in mind that this sick call for the genocide of the German people was written, for the most part, before Germany invaded Poland.  And here we are 80 years later, and we have Jews like George Soros using his billions to aid and abet the flooding of Germany with Third World Muslims and Africans, who bring terror, rape, and murder as their calling cards.  What is happening to Germany is not the result of incompetent bureaucrats; it’s the result of a unremitting racial hatred, as expressed by Theodore Kaufman.