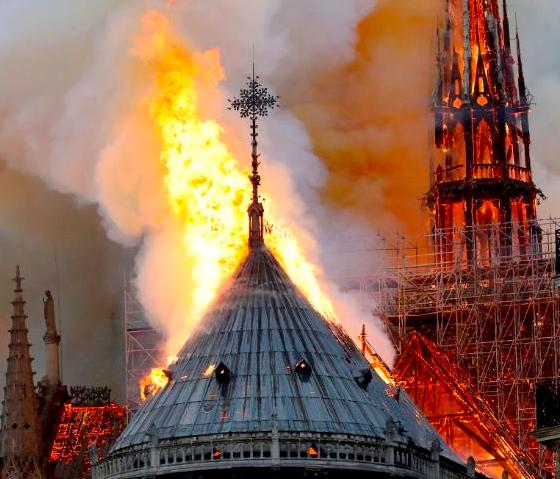 The burning of the Cathedral at Notre Dame in Paris has given the Jews at the Times of Israel the opportunity to remind everyone how Jews have ‘suffered’ while living in ‘antisemitic’ Christian Europe over the centuries:

Notre Dame Cathedral, which was severely damaged in a fire on Monday, is a symbol of France, of Paris, and of course of Christianity.

But the church is also tied to Jewish history. As elsewhere in Europe, Jews in France suffered repeated persecution throughout the Middle Ages.

The Jewish people were both revered as the progenitors of the Christian faith and reviled as blind schemers who betrayed Jesus and fell from God’s grace.

Notre Dame’s structure depicts these conflicting attitudes toward the Jewish population in centuries past. Following is a look at the cathedral’s sometimes unhappy connections to Judaism.

The cathedral’s most famous part is its West Facade, with its two great bell towers. Below these are three large portals, each adorned with carved figures from Christian lore. The right-side portal depicts the Jewish parents of the Virgin Mary, Anne and Joachim.

Several scenes are portrayed, including Anne and Joachim’s marriage; the rejection of the couple’s offering by the High Priest of the Temple, due to Anne’s barrenness (a bima and a Torah scroll can be seen behind him); Joachim’s visitation by an angel who tells him Anne will have a daughter; and Anne’s birth.

Jews are depicted in the carvings as wearing pointed hats, as this was royally mandated dress code for Jews in the 13th century, around the time the artwork was created — as a way to distinguish them from the Christian population.

Prominently placed above the portals is the Gallery of Kings, with its 28 sculptures of ancient Judean rulers believed to have been ancestors of Mary.

The kings on display are not actually the originals — these were torn down and beheaded during the French Revolution, as they were mistakenly seen as symbols of French royalty.

The infamous Disputation of Paris, also known as the Trial of the Talmud, took place in 1240, after the Church charged that the Jewish text included numerous blasphemies against Jesus and Christianity.

Pope Gregory IX ordered all copies of the Talmud confiscated and burned. In Paris King Louis IX held a trial for the text, in which several rabbis attempted to defend it. They were unsuccessful, and subsequently thousands of manuscripts, all handwritten, were collected and destroyed in a great bonfire at Place de Greve, a square right by Notre Dame.

As in many cathedrals, Notre Dame displays the figures of Ecclesia and Synagoga.

While Synagoga is regularly depicted as simple, downtrodden, defeated and blindfolded — to signify Judaism’s irrelevance — Ecclesia is majestic, confident, often depicted with a crown, chalice and other Christian symbols.

The burning of The Talmud at Notre Dame was just one of many times when the Catholic Church ordered it destroyed.  Of course, this article makes it sound like the Christians burned the Talmud just because they “hated” Jews and their pointy hats, and not because of the disgusting blasphemies that it contains, such as Mary being a whore and Jesus is burning in hell in a pit of excrement.  Whatever “explanation” that some rabbi may have for these passages is just as insulting to our intelligence.

Jews like to remind each other, and the goyim, how they’ve ‘suffered’ at the hands of the irrationally antisemitic Christians so that they can claim the moral high ground and shame the goyim in to not opposing them.  Their collective desire is to see the suffering of Christ replaced by the suffering of the jewish people at the hands of Christians, a complete inversion of reality.  Through a jewish lens, the burning of Notre Dame is no different from burning The Talmud, a 700 year old slight that will not be forgotten.