As President, Mike Bloomberg Promises To Prosecute All ‘Hate Crimes’ As ‘Domestic Terrorism’ In a recent revealing interview with the Jewish Telegraphic Agency, presidential hopeful Michael Bloomberg claimed that he plans to fight ‘antisemitism’ and ‘racism’ by prosecuting all ‘hate crimes’ as ‘domestic terrorism’:

But I won’t stop there. I’ll speak out against hatred of all kinds.

That’s something I learned from my parents. My father never made more than $6,000, but I remember him writing out a check to the NAACP for $25 or $50, which was a lot of money for us. When I asked him why, he said: Discrimination against anyone threatens all of us.

I have always carried that lesson with me. And, as president, I will do everything in my power to put an end to all forms of discrimination.

I will label hate crimes as “domestic terrorism” — and charge perpetrators accordingly.

I will launch a national, coordinated effort, led by the FBI director and Department of Justice, to crack down on violent extremists.

I will expand the Department of Education’s Stop Bullying Campaign, so we can put an end to harassment in schools — including on college campuses.

And I will never stand by idly in the face of hatred — against anyone.

When the bolshevik Jews invaded and took over Russia in 1917, the first law they passed was, yes, making ‘racism’ and ‘antisemitism’ not only illegal, but capital offenses.

And if you were one of the Christian Russians who dared to notice that most of the revolutionaries who were taking over the country were Jewish, you were lined up against a wall and shot.

They murdered over 60 million White Christians during their jewish reign of politically-correct terror.

The day is coming soon when one day Americans will wake up from their slumber, look around, and realize that virtually everyone in a significant position of power is either Jewish or a protected minority.

And if you dare share your objective observation on social media, there will be a knock on your door, and you will be hauled in to a police station and interrogated for your ‘hate crime’.  Doubt it?

Our jewish U.S. Attorney General is in the process of prosecuting a woman for merely slapping a Jew on the street for a Federal ‘hate crime’ for which she could potentially face 10 years in a Federal prison.

This is the America that a Michael Bloomberg presidency promises you.

Bloomberg wants your guns so that White Americans have no way of defending themselves when his Cheka-style secret ‘hate crimes’ police force kicks in your door for a counter-revolutionary Tweet you made or book you read. 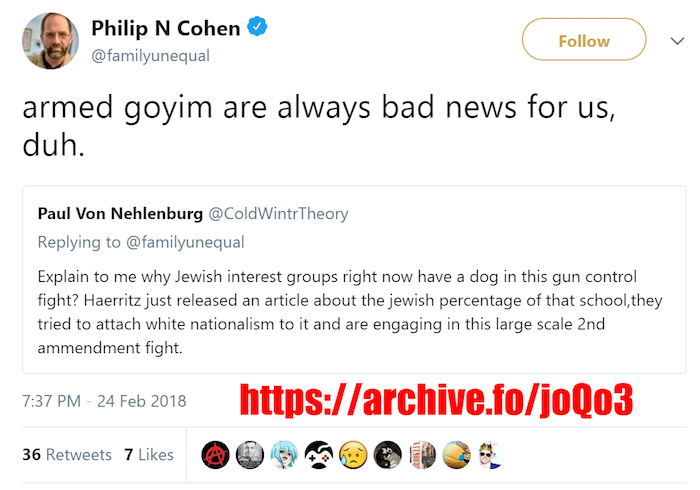