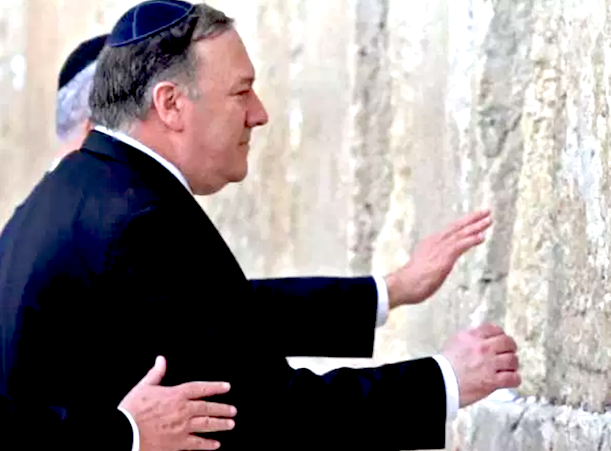 Mike Pompeo, the U.S. Secretary of State, has been caught red-handed trying to stop the UK’s Labour Party leader Jeremy Corbyn from becoming Prime Minister after an audio clip leaked to the Washington Post featured him reassuring Jewish leaders that he would “push back” against the Labour party’s leadership after continued allegations of antisemitism within its fold:

In the leaked recording, Mike Pompeo was apparently asked what he would do if Jeremy Corbyn were elected prime minister.

The questioner asked: “Would you be willing to work with us to take on actions if life becomes very difficult for Jews in the UK?”

In the response, Mike Pompeo appears to suggest he would seek a pre-emptive push back before Labour leader Jeremy Corbyn had an opportunity to claim the prime minister’s seat.

“It could be that Mr. Corbyn manages to run the gauntlet and get elected,” he said in the audio clip.

“It’s possible. You should know, we won’t wait for him to do those things to begin to push back. We will do our level best. It’s too risky and too important and too hard once it’s already happened.”

In response to Pompeo’s comments, a Labour spokesman rejected accusations of anti-Semitism and condemned US President Donald Trump and his senior officials for wading into British domestic politics.

“President Trump and his officials’ attempts to decide who will be Britain’s next prime minister are an entirely unacceptable interference in the UK’s democracy,” said the spokesperson.

One would think that Jews in the U.K. would be excited to see Jeremy Corbyn, who has publicly acknowledged that he has jewish ancestry, become Prime Minister of England, but apparently Corbyn’s concern over the welfare of the besieged Palestinians has disqualified him as a legitimate contender for any higher leadership.  Under the new definition of ‘antisemitism’ that Jews are pushing on the international community, public displays of solidarity with the plight of the Palestinians is tantamount to wanting to genocide Jews and deprive them of their ‘homeland’ in Israel.

So it should come as no surprise to anyone that the Jews, not the ‘Russians’, have been caught on tape strong arming the U.S. Secretary of State to interfere with the free elections in another country.  And it should also surprise no one that no Jews will be reprimanded or fired after being caught red-handed interfering with elections for the simple reason that they have smeared Corbyn as an ‘antisemite’, and we all know that ‘antisemites’ have no legal rights or recourse.  When you displease the Jews, you become persona non grata, and anyone who comes to your defense will also be smeared as a Nazi sympathizer.