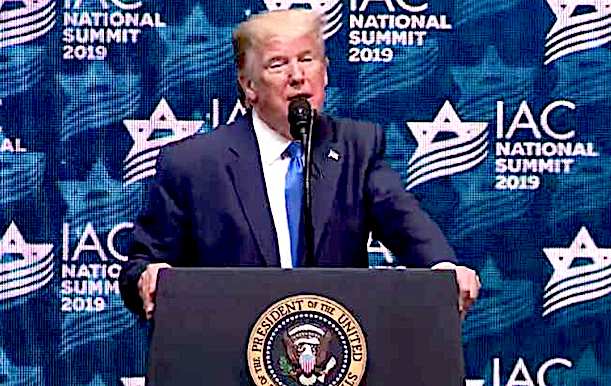 Some American-Jewish groups are calling out US President Donald Trump, saying that his remarks at the Israeli-American Council summit in Florida on Saturday were ‘vile’ and antisemitic:

The president also claimed that some Jews “are great people” but “don’t love Israel enough,” while boasting his achievements in the Jewish state.

Jewish American groups, including J Street and the Jewish Democratic Council of America (JDCA) are calling out Trump.

The JDCA recently put out an ad claiming that Trump is “the biggest threat to American Jews.” JDCA Executive Director Halie Soifer responded to the president in a statement, “American Jews do have a choice, and they’re not choosing President Trump or the Republican Party, which has been complicit in enacting his hateful agenda.”

J Street tweeted, “The President of the United States is incapable of addressing Jewish audiences without dipping into the deep well of antisemitic tropes that shape his worldview.”

However, not all Jewish American groups were upset with Trump’s statements.

Republican Jewish Coalition Executive Director Matt Brooks tweeted, “To all those who are saying @realDonaldTrump trafficked in antisemitic tropes in his speech last night by talking about how the Dems will tax them see their wealth evaporate- get over yourselves. He literally talks about this at every rally!”

Make no mistake: Trump loves the Jews, and the Jews love Trump, and if the Jews didn’t love Trump, he would not be president.

The reason that there is any antisemitism in the world is that many Jews, especially ones in very powerful positions throughout history, have not been particularly “nice people”, and many of those were “brutal killers“.  And in private, Jews are very proud of this abrasive personality trait which they skillfully hide from the public via their stranglehold on the media.

Just take a look at the jewish Bolsheviks who invaded Russia and murdered 60 million Christians: they were the epitome of “brutal killers,” and they weren’t even real estate tycoons, the ones Trump has dealt with throughout his professional life.

They are indeed “brutal killers” in business — using the Federal Reserve, they have reduced this once-great nation from an economic juggernaut the likes of which the world has never seen, and reduced it to a de-industrialized welfare state in the short span of 50 years.

And jewish gangsters, according to their own accounts, were so brutal and cutthroat that they made the Sicilian Mafia look like choir boys.  One of the Founding Financial Fathers of the ersatz State of “Israel” was Uber Crime Boss, Meyer Lansky, who funneled vast sums of his ill-gotten wealth into that God-forsaken sliver of desert.

View the relevant part of his speech below: