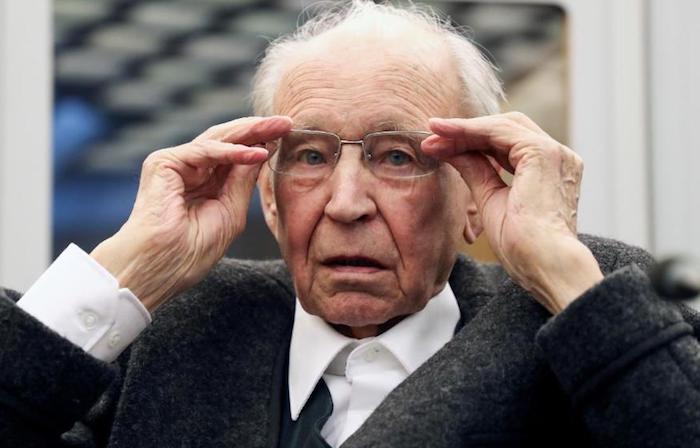 In a rare moment of candor, Christoph Ruecken, an attorney who is representing a so-called “holocaust survivor” at the trial of 94 year old former concentration camp guard, Johann Rehbogen, admitted that the purpose of the prosecution was to intimidate anyone today who opposes the jewish agenda:

A former Nazi concentration camp guard on trial on hundreds of counts of accessory to murder has testified he was aware that inmates were dying but says he didn’t know they were being killed.

Johann Rehbogen told the Muenster state court Thursday he knew the conditions of the Stutthof camp were “miserable” and had attributed the deaths primarily to “diseases and epidemics.”

More than 60,000 people were killed in Stutthof in a gas chamber, by lethal injection, shootings and other methods.

In the statement read by his attorney, the 94-year-old said he didn’t know much about the “structure inside the camp,” the dpa news agency reported.

He said “they told me which post to take and I obeyed.”

Prosecutors argue Rehbogen is an accessory because he helped the camp operate.

In a hearing Tuesday, Rehbogen voiced his shame at having been part of the SS but insisted he was unaware of the systematic killings at Stutthof.

“I’m of course ashamed to have been part of the SS. But I still don’t know today if I would have had the courage to do otherwise,” he said…

…But lead prosecutor Andreas Brendel said that there were “ways out” of serving at the camp for guards like Rehbogen.

“We believe that the guards knew a lot more than what has been recounted today,” he said.

…Manuel Mayer, a lawyer of a former detainee, said: “His statement was absurd. I don’t believe him.”

Rehbogen was aged 18 to 20 at the time and is therefore being tried under juvenile law.

If found guilty, he faces a sentence of up to 15 years in prison. Given his age and the possibility of an appeal he is considered unlikely to serve any time behind bars.

Rehbogen, from North Rhine-Westphalia state, is a retired landscape architect and divorced father of three, according to German media.

At the trial opening last week, he shed tears when he heard written testimony from Holocaust survivors.

Christoph Ruecken, a lawyer representing an 85-year-old Holocaust survivor who now lives in the United States, said: “A punishment would be symbolic for such an old man but that’s important in times like now when nationalism and anti-Semitism are returning.

“It’s important to show that the rule of law says you will face the court if you do these things.”

Whoever wrote this story needs to check of “official” history of the Stutthof camp, as no serious jewish historians claim that there were any “gas chambers” at the camp.  But let’s not allow facts get in the way of a good propaganda opportunity to use this trial as a weapon of intimidation against any critics of the Jews, or simply anyone the Jews don’t like.  Even if you get away with criticizing Jews today, they will track you down 70 years from now and put you on show trial for “inciting violence” against Jews.

It would never occur to the myopic Jews that putting a 94 year old prison guard on trial with no direct proof of any wrong-doing might cause some ill feelings toward Jews in general.  But after all, Jews have nothing to do with “antisemitism” which afflicts the “goyim” for no reason whatsoever.  Nothing that any Jew has ever done throughout recorded history could possibly cause, let alone justify, antisemitism.  And any goy who denies wanting to kill six million Jews is obviously a “liar” like Rehbogen whose prosecution is a public warning for the goy to shut up or else.