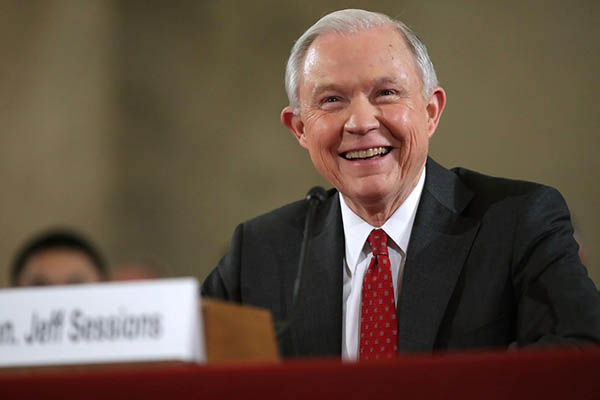 Attorney General Jeff Sessions, speaking before the Alliance Defending Freedom’s [ADF] annual summit, made it very clear that the Justice Department will not have anything to do with the jewish supremacist, anti-White hate group, the Southern Poverty Law Center:

But when I spoke to ADF last year, I learned that the Southern Poverty Law Center had classified ADF as a “hate group.” Many in the media simply parroted it as fact. Amazon relied solely on the SPLC designation and removed ADF from its Smile program, which allows customers to donate to charities.

They have used this designation as a weapon and they have wielded it against conservative organizations that refuse to accept their orthodoxy and choose instead to speak their conscience. They use it to bully and intimidate groups like yours which fight for the religious freedom, the civil rights, and the constitutional rights of others.

…As for me, I am not going to apologize for the United States of America or our First Amendment. I am not ashamed of this country or our people. This is the greatest, most generous country in the history of the world.

Let me say this loud and clear: at the Department of Justice, we will not partner with hate groups. Not on my watch.

The Southern Poverty Law Center is a jewish organization that has nothing to do with “poverty” in “The South”; rather, like it’s sister group, the Anti-Defamation League, it is a multi-million dollar domestic spying agency that monitors the activities of White people who oppose the radical social agenda promoted by Jews and their lackeys.

In the past, the Department of Justice has consulted with the SPLC and ADL when prosecuting so-called “hate crimes”.  However, even if they no longer have a “partnership” with the SPLC, as long as Justice continues to work with the ADL, the constitutional rights of White Americans will continue to be at risk–and continue to be eroded.

After all, it’s the ADL, not the SPLC, who has sponsored and written, many of the “hate crimes” legislation proposed across the country.