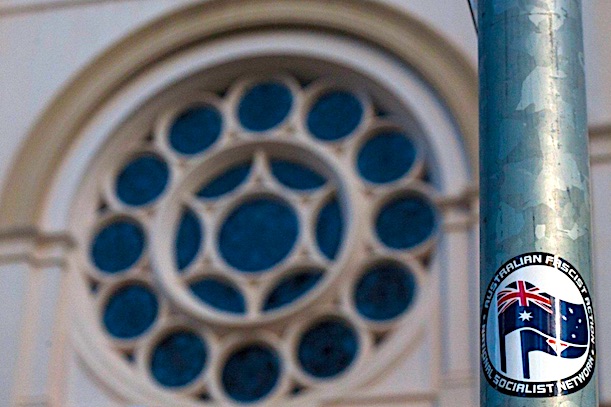 The Anti-Defamation Commission, the top Australian Jewish supremacy organization, condemned a so-called ‘neo-Nazi’ group that allegedly targeted a Brisbane synagogue with a ‘threatening’ stickers and a post on social media:

The post on Gab by the National Socialist Network (NSN) showed a sticker with the group’s logo on a pole in front of the shul.

Above was the text, “Brisbane lads chucked up stickers in the CBD, letting the chosen know that the White man knows what they’ve been up to.”

The post in question has been reported to law enforcement.

Dr. Dvir Abramovich — chairman of the Anti-Defamation Commission (ADC) — said of the incident, “These home-grown extremists and domestic terrorists in waiting are a ticking bomb, and no one can feel safe while they are walking our streets, promising a racial war and recruiting like-minded bigots.”

“The worst thing we could do is to downplay the threat of deadly violence that such agitated and angry hardcore neo-Nazis pose,” he added. “Where white-supremacists gather and communicate, physical assaults and murder are usually not far behind.”

“Our law enforcement agencies and our elected representative must take such groups seriously if we want to prevent any bloodshed,” Abramovitch declared.

Historically, Jews like this cringing neurotic Abramovitch have always lived in fear that the goyim will find out what they are really up to and there will be a violent reaction.

They have been kicked out of nations and states over 300 times when the goyim have lost their patience with them — and they mistakenly believe if they control every facet of society, they can never be expelled again.

In fact, Abramovitch has admitted that his attempts to combat antisemitism always creates even more antisemitism — the paradox of Jewish identity politics.

This fearful attitude is expressed in their ‘holy’ book The Talmud, which warns Jews to cheat, rob, and harm the goyim but only as long as it doesn’t bring unwanted attention upon the Jewish community.

And, of course, The Talmud provides the blueprint of how the Jews can cheat, rob, and harm the goyim — which is why the rabbis command that any goyim who reads The Talmud must be killed.

From a Jewish perspective, killing an enlightened goyim is self-protection — and therefore justified.

Clearly, the Jews in Australia are very concerned that the White Australians are waking up and are on to their nation wrecking shenanigans — and they are worried that the goyim might want to round them up and start throwing them in gas chambers, or some other fantastical homicidal scenario.

So they have their well-paid ‘trusted’ goyim media whores educate the Australian public about just how wonderful Jews are — and how they can best express their admiration for them.

The Jewish solution to this problem is use the full force of the legal system, which they control, to make it illegal for the goyim to ‘gather and communicate’, to compare notes on, or even joke about what the Jews are up to.

After all, if you become aware that the Jews who live among you do not have your best interest at heart, you may become ‘unmanageable’, and you will require ‘correcting’, which can often involve loss of job, break up of your family, jail, and, if recalcitrant, something more ‘prejudicial’.