Austrian MEP: EU Cannot Accept One Single African or Arab if It Wants to Survive 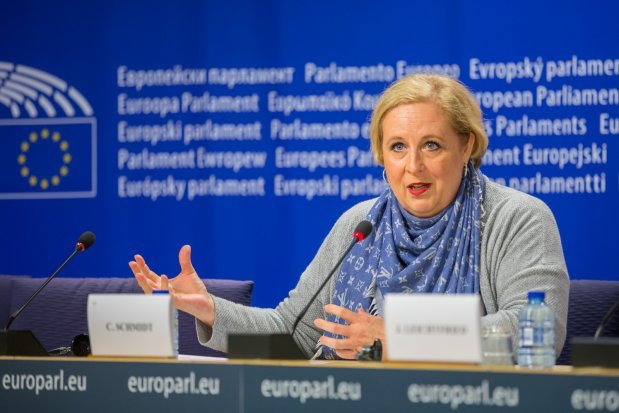 Austrian MEP Claudia Schmidt recently had the courage to write on her Facebook page what all of us already know–that non-Whites have no place in White Christian European society, and if it continues to allow them to immigrate, Europe will be destroyed:

She wrote, “You can read it daily in any newspaper and I have personally experienced it in refugee camps and during election monitoring. Neither the African nor the Muslim culture are compatible with our culture. The desperate “dominant culture” debates that go round every 2 years also show this. Accordingly, I see massive and arbitrary immigration to Europe from regions with an alien culture as a great threat to our society. Immigration leads to a deterioration in Europe and stagnation in Africa itself. The migration summit in Salzburg, due to take place in exactly 5 weeks, is therefore actually one of the most important summits. The decision must be taken in Salzburg that the only people who can come to Europe are those who have an invitation and there must be an end to the practice of many countries issuing generous invitations and others then having to pick up the tab for them. Before some people misunderstand me (willfully), we have a humanitarian obligation to help war refugees in whatever country and it is also in our interests to offer development aid.

But if we want to preserve our society as it is, we cannot allow any immigration from Africa. It is childishly naive to think that those very people whose cultures produce nothing but misery, persecution, oppression and hopelessness can make a positive contribution to Europe. Africans do not want to think and work like Europeans, but they do want to live like Europeans. If they really want our society and achievements, they could also make them a reality in Africa. There is sufficient assistance and examples – such as the former colonies in Asia.”

Schmidt was immediately denounced as a racist, including from within her own party. Her party’s general secretary called on her to apologise and threatened unspecified “consequences”.

She then deleted the postings and apologized for the “inappropriate and wrong choice of words.”

The truth is racist, and if Whites have any desire to survive, they can no longer be cowered and silenced by the hollow accusation of “racism”.  Every MEP knows that Schmidt is telling the truth, but they will pretend otherwise, perhaps going so far as to demand her resignation. But if she’s silenced, there will another to take her place–the more the truth is suppressed, the more it will demand to be heard.

Of course, any so-called “achievements” we see in Asian societies that Schmidt mentions are solely due to White assistance.  All advancements in technology have been gifts from Whites–and Asians are merely clever enough to copy them, while Blacks are not and use them until they are destroyed.  Either way, both races are completely dependent on Whites.