Autistic And ‘Inept’ U.K. Teen Gets Five Years In Prison On ‘Terror’ Charges For Pretending To Be A ‘Neo-Nazi’ 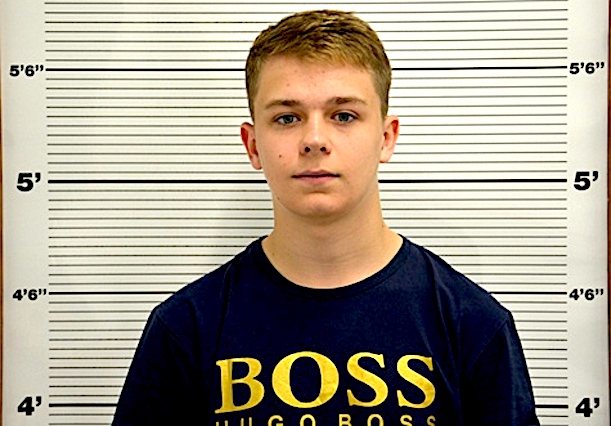 An autistic 17-year-old with obsessive-compulsive disorder — and self-described “neo-Nazi” — has been jailed for over five years for allegedly “preparing acts of terrorism” after merely researching how to turn a blank-firing gun into a live weapon:

Paul Dunleavy – who can now be named in the public’s interest – claimed he was “a nine to 10” on a scale of extremism, with “full-on Nazi Hitler” as a 10.

The Rugby boy gave advice to other neo-Nazi members of a chat group, part of the banned terror group Feuerkrieg Division (FKD), and was the administrator of another called the League of Nationalists.

One of the recipients of Mr Dunleavy’s advice [allegedly, ed.] later planted a bomb, according to the Express and Star.

The Warwickshire resident’s online remarks, including antisemitic and racist slurs, were recorded by an undercover officer.

Knives, bullet casings, shotgun cartridges and a home-made gun stock were among items found in the teenager’s bedroom, along with sketches of swastikas.

Mr Dunleavy had posted online that he wanted to build a gun capable of “smashing heads” and had praised the New Zealand gunman who killed 51 attendees of a mosque last year.

Sentencing Mr Dunleavy on Friday, Judge Paul Farrer QC said the boy’s autism had led to “an obsessional interest in firearms”, but described his efforts to commit an act of terror as ultimately “inept”.

He added: “You knew you were communicating with extreme right-wing individuals who harboured terrorist intentions.

“In these circumstances you repeatedly offered practical advice on the construction of improvised firearms.”

In July last year, Mr Dunleavy told the undercover officer he was “100 per cent serious” about converting the blank-firing pistol he owned.

Despite showing an abundance of “bravado and exaggeration”, Judge Farrer commented that there was still a real risk his encouragements would put lives in danger.

Mr Dunleavy was also handed two years’ detention for possessing terrorist documents, to run concurrently to his other convictions.

Head of West Midlands Counter Terrorism Unit, Detective Chief Superintendent Kenny Bell, said: “This boy had an unhealthy interest in other attacks across the world and he knew exactly what online platforms to join to share his extreme views.

“He believed he had the skills to convert a blank firing weapon into a viable firearm and was willing to help others with his abilities.”

So the judge acknowledges that this kid was “inept” and had an exaggerated sense of his own capabilities to enact any real “terrorist” acts, but he went ahead and sentenced him as if he were a real threat to others.

Meanwhile, Muslim and African kids his same age are murdering, raping and beating people everyday in England’s cities — terrorizing women, children, and the elderly — but this LARPing “neo-Nazi” goes to prison without hurting one single person.

If an autistic Black or Muslim kid had raped a White girl — which happens every day — they wouldn’t do a single day in prison — his autism would be a mitigating circumstance.

And if you complain about these migrant rapes, you’ll be the one going to prison, not the rapist.

If you display verses from the Bible in your own place of business and it “offends” anyone, you will find yourself facing jail time.

In today’s “England”, even vegans are free to engage in domestic terrorism — because their cause furthers the agenda to brutally bolshevize the nation.

Even pedophiles living next door have more rights to privacy than anyone who complains about it.

Nowhere in this article do we hear any attempt by the court to find out from the kid WHY he became interested in “Nazis” and firearms — for the simple reason that they know why — the kid sees violent Black and Muslim criminals victimizing Whites in his own country and he looks for a way to defend himself and those he loves.

But the kid’s real “sin” was his fascination with “Nazis” — and the dangerous symbols associated with them –those “evil” Germans who had the temerity to go to the root of the cause of their societal ills — the communist and captialist Jews who were running their beloved Germany into the ground.

And if this autistic kid figured out that the Jews in England were behind the rampant migrant crime, he stepped over the line of “civility” and needed to be punished to “protect” the Jews from further possible exposure.