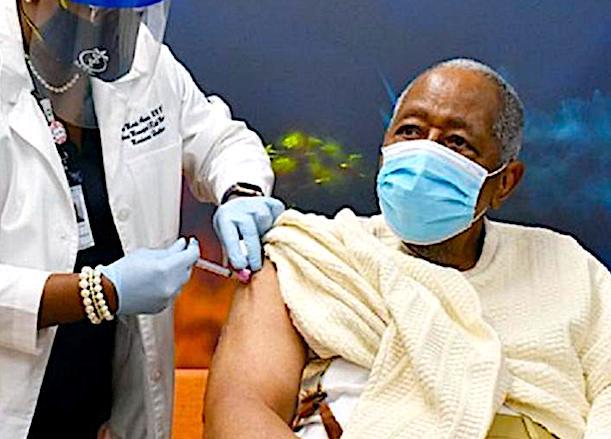 Aaron was 86 years old and joins a growing list of seniors above the age of 80 who have died shortly after receiving one of the mRNA experimental COVID injections.

Earlier this month we reported that 23 seniors in Norway, all above the age of 80, died shortly after being injected with the experimental COVID injections.

The Pharma-controlled corporate media, while announcing Hank Aaron’s death today, are predictably not mentioning the fact that he was recently injected with the Moderna COVID shot.

Aaron received the shot along with former U.N. Ambassador and civil rights leader Andrew Young and former U.S. Health and Human Services Secretary Louis Sullivan at the Morehouse School of Medicine in Atlanta.

The Associated Press reported that Mr. Aaron was “hoping to send a message to Black Americans that the shots are safe.”

While the Pharma-owned corporate media will do their best to spin his death as not related to the mRNA injection, I seriously doubt that his death will convince anyone that these experimental shots, which are NOT approved by the FDA, are in fact safe.

Even if his death is somehow found to be related to the vaccine, expect them to spin that also, by repeating their mantra that these shots are safe and that deaths like this are “rare,” and that Mr. Aaron’s death was somehow something “good” for the sake of the “greater good” of public health.

The REAL truth here, however, is that Mr. Aaron’s death is tragic, and was totally unnecessary. No doubt he is another victim of the Big Pharma propaganda that is disseminated through their controlled corporate media.

Those in Mr. Aaron’s age group have had a more difficult time escaping the corporate media propaganda and adapting to the technology that allows them to do their own research and check and verify the propaganda coming through this Pharma-controlled corporate media.

Those who only get their information from this corporate media are risking their lives, and these media outlets are guilty of mass murder, as they work hand in hand with Big Pharma Wall Street Billionaires to squelch any free speech that disagrees with them.

No official cause of death has been released — of course — just the reassuring statement that “he died peacefully in his sleep” — exactly how everyone would ideally like to die.

And that’s exactly what euthanasia is — dying peacefully via lethal injection — so what’s there to complain about?

All the major media outlets are focusing on the “racism” that Hank Aaron had to overcome in his life — and so only it’s fitting that he would be used as a pawn in this manner — to lure other unwitting — mostly elderly — Blacks into getting this deadly “vaccine”.

Of course it’s racist to suggest that Blacks should trust Hank Aaron just because he’s Black — but that’s been a problem for Blacks in America all along — they’ve been encouraged to root for their fellow Blacks no matter how ignorant, misguided or criminal — it doesn’t matter as long as they are Black.

No doubt with the help of the media, no one will put two and two together no matter how many thousands — or even millions — of elderly die after receiving this vaccination.

After all, the television often becomes the “best friend” of the elderly in their final years — and when that television tells them it’s time for them to go — who are they to disagree?