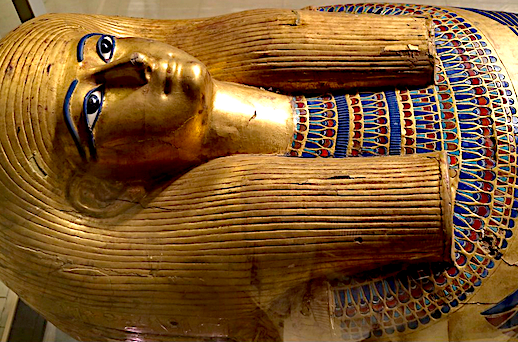 Egyptian noblewoman Tjuyu and her husband Yuya were important figures in Amenhotep III’s court, and she is believed to have died in 1375 BC.  Most widely known as being the great-grandmother of legendary pharaoh Tutankhamun, her tomb was discovered in 1905, and a documentary The Nile: Egypt’s Great River filmed a rare opening at the Egyptian Museum in Cairo.

…Bettany noticed something strange about Tjuyu’s mummified corpse; rather than having dark brown hair, like the vast majority of other Ancient Egyptian mummies, she had “strawberry-blonde hair.”  This somewhat bizarre phenomena was explained away by Egyptologist Ikram who said that it is unclear how her hair got to be this color, saying “We’re not 100% sure [if that is her original hair ].”

One of the reasons offered for the color of hair is the use of ‘natrons’ in the mummification processes . This naturally occurring mixture of ‘sodium carbonate decahydrate’, which was also an ancient household insecticide , was primarily used for making leather and to bleach clothing. This implies Tjuyu’s true hair color might have been deliberately lightened to give it a blonde-look or may have occurred accidentally through mummification.

…[According] to Dr. Janet Davey from the Victorian Institute of Forensic Medicine in Australia, some ancient Egyptians were naturally blond and sometimes red haired .

An article recently published by The Sydney Morning Herald explains that most researchers claim different colors of the mummy hair resulted from the chemical interactions in the mummification process itself (natrons).  However, Dr. Davey undertook a series of “innovative experiments” covering “16 hair samples from Egyptian people ” in the salty ash for 40 days. Guess what? Not a single change in hair color was observed.

Dr. Davey is convinced that there were fair-haired Egyptians but finding fair-haired mummies is “very rare,” and this is why Egyptologists previously believed that lighter hair color was created during the mummification process.  Davey suggests that these blond haired folk lived in Egypt during the Graeco-Roman Period (332 BC – 395 AD).

On December 14, 2014 Ancient Origins reported on a remarkable discovery in Fag el-Gamous necropolis, which lies along the eastern edge of the Fayum depression near Seila in Egypt. Dating to the time when the Roman or Byzantine Empire controlled Egypt, from the 1st to the 7th century AD, this enormous cemetery, believed to contain over one million burials, was excavated over three decades by archaeologists at Brigham Young University in Utah who among their discoveries unearthed “blond and redheaded mummies.”

Since the dawn of recorded history, if we have the eyes to see, it has been the same old story told over and over again.  Great civilizations built by Whites eventually went into decline as the Whites moved away to start another one and the ones who stayed were absorbed by the non-White populations that moved in to live upon the ruins.  Over time, the non-Whites came to believe that their ‘ancestors’ had built those great civilizations, a fable upon which their fragile national pride is based, as is the case of today’s brown residents of Egypt, or in the case of today’s Arab Tunisia, which was founded and built by the ancient Israelite Phoenicians as Carthage.

For an “Egyptian” today to claim that they are a real Egyptian is the equivalent of a half-caste African who is born in London claiming to be British, or an Arab born in Germany claiming to be German, or a Jew born in France claiming to be French.  If current disturbing population replacement trends continue, it won’t be long before these absurd assertions will go uncontested as these brown and non-White people who will inherit these formerly White nations continue to rewrite history and calling the ruins upon which they live their own.  There’s truly nothing new under the sun.