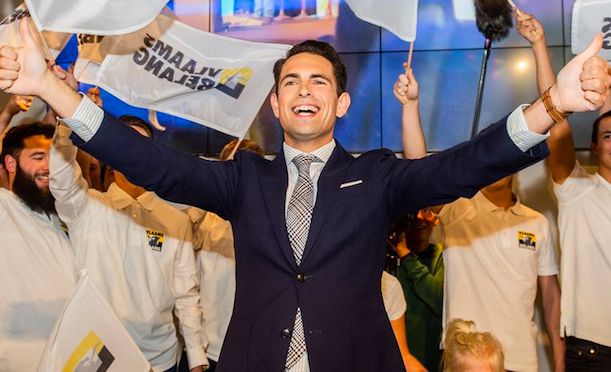 The ‘cordon sanitaire’ around Vlaams Belang is “more necessary than ever,” a major Jewish organization said on Thursday, one day after King Philippe received the president of the extreme-right party, the big winner in Sunday’s election in Belgium:

The Centre communautaire laïc juif (CCLJ) fears that the ‘cordon sanitaire’ placed around Vlaams Belang is being called into question since the election.

“Through its anti-democratic and subversive nature, Vlaams Belang fully justifies the maintenance of the exceptional measure that is the cordon sanitaire,” stressed the CCLJ.

Using similar political rhetoric that Jews have historically ascribed to the  ‘Nazis’, this powerful jewish advocacy group (CCLJ) is demanding that Belgium’s conservative nationalists be literally ‘quarantined’ or politically ‘ghettoized’ because the Jews find their political views ‘unsanitary’ and a ‘threat’ to the public health.  In fact, the jewish ‘historians’ contend that the ‘Nazis’ used this type of ‘sanitation’ rhetoric as a cloak or ‘dog whistle’ to hide their ‘genocidal’ intent to ‘gas’ 6 million of them.

But of course, if the Jews truly hated the ‘Nazis’ as much as they contend, then why are they now adopting the same inflammatory political rhetoric that was allegedly used against them in Germany prior to the outbreak of WWII?  Clearly, Jews are terrified of the idea that the ethnic Flemish people have a right to decide their own destiny and to live among themselves as they see fit, just as the Jews in Israel have that right.  And if the Jews get their way,  members of Vlaams Belang may be rounded up and put in ‘santitation’ facilities to ensure that the rest of the Belgians aren’t ‘infected’ with their ‘genocidal’ political rhetoric.

It would seem that Martin Luther’s observation of the Jews may indeed becoming more true than ever before, ““If they had the power to do to us what we are able to do to them, not one of us would live for an hour.  But since they lack the power to do this publicly, they remain our daily murderers and bloodthirsty foes in their hearts.”
– Martin Luther (1483-1546): “On The Jews and Their Lies”