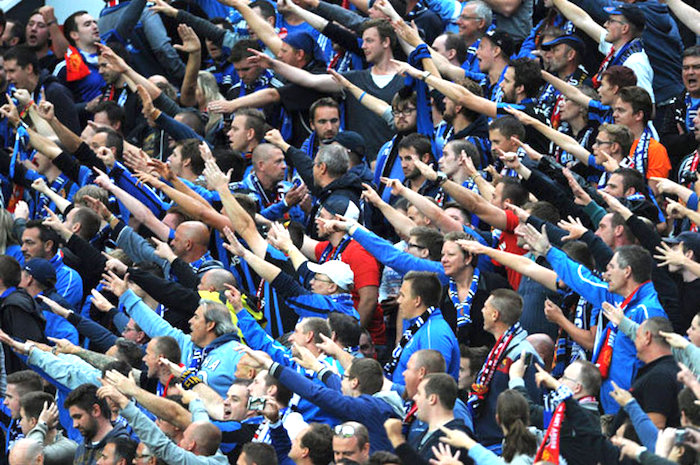 A Belgian news site has published video footage of soccer fans in Brugge celebrating a victory by allegedly chanting about burning Jews and glorifying their Nazi past:

La Derniere Heure published footage from the August 26 match on Wednesday. It shows dozens of fans celebrating their local team’s victory over Brussels’ Anderlecht team that day by singing in Flemish: “My father was in the commandos, my mother was in the SS, together they burned Jews ’cause Jews burn the best.”

The chant, whose use was first reported by the media in 2015, has proliferated in the Netherlands and Belgium in recent years. In some cases, fans chant it to taunt counterparts from rival teams that are seen as historically Jewish. Some fans say Anderlecht is such a team, although that soccer club is not famously associated with Jews.

But the chant has appeared in situations connected to neither Jews nor soccer, including a high school graduation party in 2016 near Amsterdam.

The soccer club of Brugge, a city located 40 miles west of Brussels, said in a statement: “We strongly condemn this behavior,” the HLN news website reported. The club said several fans have been identified and slapped with a ban on entering the team’s Jan Breydel Stadium.

Michael Freilich, editor-in-chief of the Joods Actueel Jewish magazine in Antwerp, on Thursday went to the stadium with photographs of Holocaust victims that he asked club bosses to share with fans.

“There are always excuses,” he said. “But this is unacceptable.”

The European Jewish Congress called on local and international soccer authorities “to take stricter measures against this antisemitic abuse and use harsher punishments.

Belgians are among the most liberal and tolerant, and therefore judaized, people in western Europe,  They have sent people to prison for denying the so-called Holocaust.  If there was ever a country in Europe that the Jews have in their back pocket, it is Belgium, or so it seems.  Apparently, all these repressive measures by the Jews could be backfiring, as latent antisemitism seems to be bubbling right under their veneer of tolerance and multiculturalism, or so the Jews would like us to believe.

Do the Jews honestly believe that if they show some fake photos of the so-called Holocaust at a future soccer match in Belgium, that it will convince fans to mend their ways and stop chanting about burning Jews?  Don’t Jews understand that the more they insist on dictating the behavior of the goyim, the more likely it is that the goyim will rebel, and actually become antisemitic, instead of just making youthful jokes about it?  This is exactly how Jews, paralyzed by their own paranoia, will bring about what they fear the most.