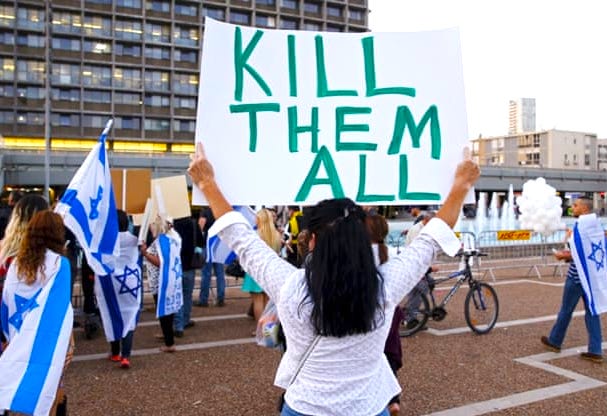 Barak Ravid, the senior diplomatic reporter for Haaretz, published a series of tweets about Israeli Prime Minister Benjamin Netanyahu’s efforts at coalition-building on the far right:

“Prime Minister Benjamin Netanyahu has been spending much of his time making sure a racist, xenophobic, Homophobic Ultra-Right wing fringe party which is the Israeli version of David Duke passes the electoral threshold [of four seats] & makes it into the Knesset in the April 9th elections.”

“The name of this party is ‘Jewish Power’ & its members are followers of Meir Kahana – former leader of ‘Kach’ party which was banned from running in the elections in 1988 and was designated as a terror organization in Israel, the U.S., Canada and the EU.”

“The leader of ‘Kach’ Meir Kahana managed to get elected in 1984 and was boycotted by all the other parties in the Knesset. He tried to pass a law for stripping non-Jews from their citizenship, a law for separate beaches for Jews and Arabs and other racist laws.”

“Back at the time senior members of Likud attacked Kahana’s draft bills and said they were similar to the Nuremberg laws passed by the Nazis before the Holocaust. It was actually a quite accurate comparison.”

“The members of ‘Jewish Power’ are all followers of Rabbi Kahana and his racist ideology. Some of them even said it on the record. Baruch Marzel – a senior member of ‘Jewish Power’ — was the chairman of ‘Kach’ after Kahana was assassinated.”

…“Netanyahu is making a lot of efforts to get those guys elected. He is pushing privately and publicly all the different factions in the radical right in Israel to unite with “Jewish Power” and form one radical right party.”

“Netanyahu wants a united radical right party with the ‘Kahanists’ in order to make sure no right wing votes go to waste and to make sure the right wing block in the Knesset get at least a 61 members majority.”*

“Inside the Likud – the same party which boycotted ‘Kach’ and Kahana in 1984 – nobody is sounding even the smallest bit of criticism against Netanyahu’s actions. Some in Likud are even supportive of Netanyahu’s efforts to get the Israeli David Dukes into the Knesset.”

Netanyahu has been courting overtly “racist” and “xenophobic” political allies in Israel and abroad in a clever plan to become the darling of White Nationalists in America and Europe, to set Israel up as the model for an healthy “ethno-state” to which White nations can aspire, but will never be allowed to achieve.  And it seems to be working, as even alt-Right figures like Richard Spencer have praised Israel as a successful race-based nation.

And Netanyahu has been openly courting Europe’s right wing “extremist” leaders in Hungary, Poland, and the Czech Republic.  He is doing this not because he supports White Nationalism in those countries, but as a ploy to insure that any resurgence of right wing “extremism” will be decidedly pro-Israel.  And of course, this is consistent with the views of David Duke, who has argued for years that Whites in America and Europe should be allowed to enjoy the same right to have their own ethno-states as the Jews have in Israel.