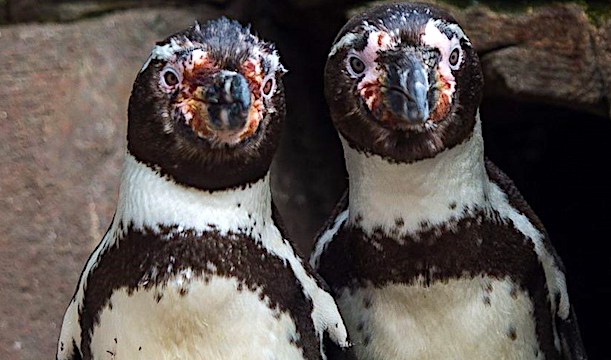 “Both male penguins behave as exemplary parents, taking turns to warm the egg,” Jaeger said. The penguins Skipper and Ping always remain near the egg and protect it from other animals.

The couple arrived in Berlin in April from the Hamburg Zoo. The animals aged 10 clearly showed signs of desire to have an egg.

“They were trying to hatch fish and stones,” Jaeger said. After having seen this, the zoo staff entrusted them with an egg from the only female of the group that had failed in recent years to hatch her own. As soon as they received the egg, the penguins went to work. “We are not certain, however, that the egg has been fertilized. If it has been, it should hatch in about 55 days.”

This is not the only recorded case of homosexual couples among penguins, both in captivity and in the wild. “Homosexual couples exist in their natural habitat,” Jaeger said, adding that it was not so rare.

Other zoos have already been successful after having given an egg for adoption by a homosexual couple. This would be a first in Berlin.

First they promoted the “science” of evolution to convince us that we are animals, and then they convinced us that if animals do it, it’s natural for us to do it.  Then they convinced us that, contrary to all tenets of “evolution”, that “homosexuality” is common in the animal world and therefore we should all engage in it and not feel any shame about it.  To reject homosexuality is “unnatural” and “anti-evolution”.  In the New World Order, the homosexual pedophile is the highest form of “evolved” man after all.

And in order to save the animal kingdom and the planet from “global warming,” we need to stop having White babies in particular, and apparently the best way to do that is to become gay, or have an abortion if we become pregnant, or at the very least have hysterectomies and vasectomies.  Having White children is not only destroying the planet but it also “offends” people of color who see our children as guardians of ‘White supremacy.’  If we can just get our children to somehow identify as gay penguins perhaps we can save the planet one day.