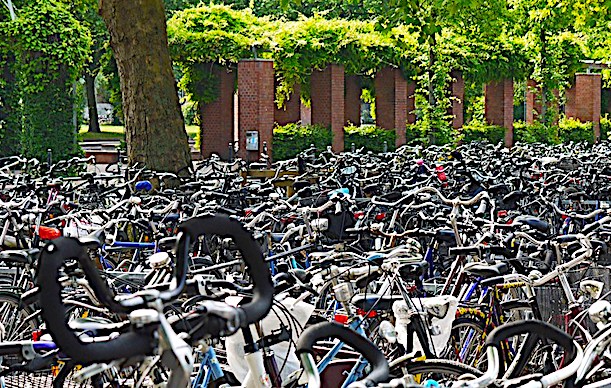 A 41-year-old man has been sentenced to three years in prison by a court in Brussels for the theft of a bicycle from a metro station in Auderghem last year:

The judge at the trial of repeat offender Charles S. qualified the theft as an “ecological crime,” as it had forced the bike’s owner to resort to a less environmentally-friendly mode of transport. The man was caught in the act by a police patrol passing by Hankar metro station.

“The time has come to punish the accused severely for offences which have grave consequences for the planet, given that the victim who was deprived of the bicycle had no option but to use means of transport which pollute more, and therefore contribute to climate change – and all that to allow the accused to buy drugs,” the judgement reads.

However, the severity of the sentence was not merely a matter of the judge’s unusual characterisation of the crime: S. is a recidivist thief, who may now take the latest three-year sentence and add it to sentences of a total of nine years for previous thefts. He has yet to serve a day of the total of 12 years he faces.

A drug addict who sold the stolen goods in the past for drugs money, he has been arrested 44 times, convicted 17 times, often for multiple offences, and has accumulated 12 years of prison time. In his verdict, the judge also hit out at a legal system which does nothing to implement the sentences magistrates hand down.

The prosecutor demanded the immediate arrest of S., which was agreed by the judge.

So of all the many crimes this miscreant committed, the most serious one of all is an alleged crime against the environment.

When it comes to protecting the environment, the hyper politically-correct Belgians apparently are even willing to prosecute even migrants and ‘under-privileged’ career criminals.

In wake of the migrant invasion, Belgium has been plagued with a serious epidemic of bicycle theft, so perhaps this will be a way of getting migrant criminals off the streets: send them to prison for crimes against Nature, and liberals can avoid ‘racist’ guilt.

You can rape our women but not Mother Nature.