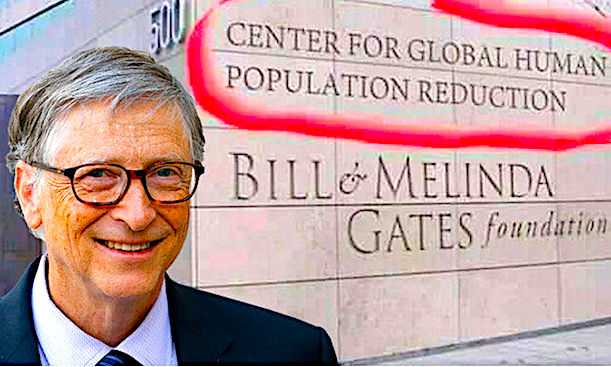 Now we know why the mainstream media has been heavily promoting computer geek and college dropout Bill Gates as an “authority” on virology, vaccines and pandemics — his “charitable” foundation has bought that positive press coverage via grants to these powerful media giants to the tune of $250 million:

Numerous prominent media outlets and journalistic organizations holding up the left-wing Gates Foundation as an authority on public health are in fact partially funded by that foundation, according to a report in the Columbia Journalism Review.

CJR’s Tim Schwab wrote that he “examined nearly 20,000 charitable grants the Gates Foundation had made through the end of June and found more than $250 million going toward journalism,” with recipients including National Public Radio, the BBC, NBC, the National Journal, the Guardian, Gannett (which owns USA Today and various major regional newspapers), the National Press Foundation, and other publications, media companies, journalism foundations, and charitable organizations related to media.

And while a 2016 report from the American Press Institute (also a Gates recipient) insisted “there is little evidence that funders insist on or have any editorial review,” CJR’s review identified several indicators to the contrary.

Schwab says he found “hundreds” of NPR articles favorably covering the Gates Foundation and Gates projects, with one particular example of a story in which “every quoted expert is connected to the Bill & Melinda Gates Foundation” (the article did notify readers of the financial support, and NPR insisted it “was not a factor in why or how we did the story”).

The foundation’s money can most strongly be felt, however, in the mainstream media’s elevation of the Gates Foundation as an authoritative voice on COVID-19, despite software giant Bill Gates’ lack of a background in medical science.

“PolitiFact and USA Today (run by the Poynter Institute and Gannett, respectively — both of which have received funds from the Gates Foundation) have even used their fact-checking platforms to defend Gates from ‘false conspiracy theories’ and ‘misinformation,’” Schwab noted, “like the idea that the foundation has financial investments in companies developing covid vaccines and therapies. In fact, the foundation’s website and most recent tax forms clearly show investments in such companies, including Gilead and CureVac.”

Without addressing CJR’s specifics, the Gates Foundation responded to the publication by simply declaring that they “strongly dispute” any suggestion that the “most respected journalism outlets in the world” have “compromised their integrity and independence.”

If the Gates Foundation were honest, they would avoid even the appearance of any conflict of interest with the media, but there is nothing honest about this badly orchestrated ‘pandemic’.

There is no rational reason for Americans to listen to anything Bill Gates has to say about the fake pandemic or the dangerous, untested vaccines that they are going to force onto the duped public.

No one in the media confronts him about NOT vaccinating his own children, as the family physician who served Gates’ family has flatly stated:

I don’t know if he had them vaccinated as adults, but I can tell you he point blank refused to vaccinate them as children,’ the family physician said at a behind closed doors medical symposium in Seattle, adding ‘They were gorgeous kids, really smart and vivacious, and he said they would be OK as it was, they didn’t need any shots.

And no one in the media bothers to ask him why he was already talking about the “coronavirus” as early as 2015.

One of Bill Gates biggest agendas is to reduce the world population — and use vaccines to that end — as he has stated clearly in his own words.

Dr. Judy Mikovits, a former employee and whistleblower who worked under Anthony Fauci at NIH, has publicly stated that she believes the COVID-19 vaccines could kill up to 50 million people in the U.S. alone — music to Bill Gates’ ears.

No wonder Gates believes that these vaccines will literally be “The Final Solution” to the world’s overpopulation ‘pandemic’.

A doctor in Italy confirmed much of this agenda in a recently posted  video on social media warning the public of the real meaning of COVID-19 — “certificate of vaccination identification”.   Here’s a transcript of his comments:

COVID-19 means the “certificate of identification of vaccination with artificial intelligence and 19 is the year it was created. COVID-19 is not the name of the virus; rather, it is the name of the international plan for the control and reduction of populations which has been developed over the last decades and launched in 2020.

What re-activeates the virus is the immune terrain in which it finds itself, weakened by former vaccinations, What they intend to inject inside of us is going to be the most terrible vaccine of all. It is literally a descent into hell, with the aim of a massive depopulation of over 80% of the population.

Do not take the tests; the tests are not reliable….Just like many test producers also affirm — none of the tests are able to accurately detect the SARS COV-2 virus. They detect only an infinity of small harmless viruses or cell debris which are already part of our micro-biome.

The people tested will increasingly appear positive in tests, about 90%.  This is their goal, and this is why they started the testing process with children.

On May 11th, no television, nor newspaper or Italian/Berlusconi broadcast announced that in France mass testing was being imposed in all schools. There were about 700,000 tests every week. However, nobody broke this news.

So once your child gets screened, the whole family and all immediate contacts will be forced to be screened.

Do not listen to the charlatans, the ignorant, who reject the truth. I remind you that we are not sick. We are, on the contrary, carriers of this virus. Having the virus does not necessarily mean that you are sick: you are healthy and fine. But everyone will still appear… positive in the tests. In fact, they make you repeat the tests 2 or 3 times. All public facility employees, especially in the health care sector, take the tests every month.

All they need to obtain is this — make everybody believe that they are sick. Being positive means being labeled as harmful.

Refusing the detection of the virus is the only key to avoid being vaccinated. Once vaccinated, we will all be severely sick, weakened, and we will certainly be lead towards our death.

The only one solution to save our humanity but above all to save us Italians is to make people truly understand that they should be tested.

Do not get yourself tested, do not give them what they lack of, do not fall into their trap.

I’m telling you this because at least you won’t be able to say that you haven’t been warned.

COVID-19 means “program of mass extermination”.  Don’t get yourself tested.  It’s the only way to save yourself.

On television, these bastards don’t and won’t ever tell the truth.  Also, politicians behave completely dishonestly.

This is already happening in some cities in China. And Spain is one of the main test driver countries along with Argentina, and all Latin American countries.

Everything has already been set up and activated in all companies and media for mass vaccination.

I will prefer death, absolutely not vaccination.