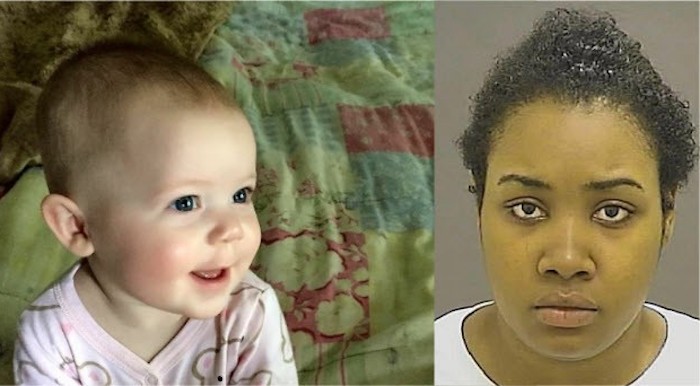 This story first hit the news about a year ago, but it serves as a valuable reminder to all Whites. The crumbling city of Baltimore is so back-logged with criminal cases, that the trial was delayed until November 2018.

“When 8-month-old Reese Bowman was found unresponsive Tuesday at her day care center, a staffer told Baltimore police she had fed the baby, wrapped her in a blanket and put her down for a nap.

She was also seen “violently snatching the child out of the crib with one arm, swinging at the baby as if she was slapping her, and placing pillows over the baby’s face,” Brandford said.

“Watching that video is disturbing,” he said. “Reese Bowman, in my opinion, was tortured.”

Walden, of Windsor Mill, was taken into custody about 3 a.m. Thursday after Rocket Tiers notified police of the surveillance camera footage Wednesday evening.

Baltimore Police say Leah Walden, a caretaker at a Baltimore daycare facility, assaulted an 8-month-old child during nap time, causing her injuries that resulted in the child’s death.

When you search for Leah Walden in the Maryland records database, you see that she has a criminal record and should never have been supervising children:

She currently has seven charges pending against her from the May 2017 case. These charges include first-degree murder, second-degree murder, as well as child abuse and assault.

Thanks to the media “black out”, these types of inter-racial crimes are quickly swept under the rug. However, they are much more common than most people realize.

Black “care workers” are regularly caught neglecting and intentionally harming vulnerable White people, especially children and the elderly, under their care. White people should seriously think twice about trusting their loved ones to any facility that hires black people as “care givers”.