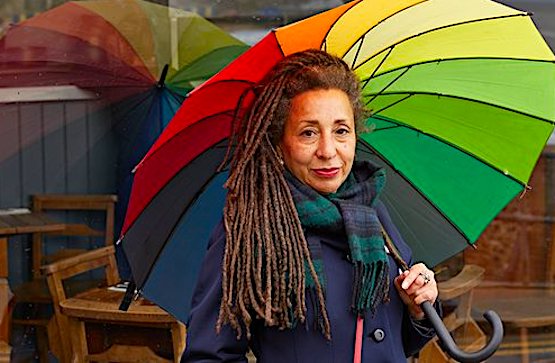 Jackie Walker, a Black Jewish activist who was expelled from the UK Labour Party for antisemitism™, ruffled some Jewish feathers when she recently retweeted an article that minimized the significance of the Holocaust™ and claimed people cared about the genocide of the Jews only because the victims were “white”:

Jackie Walker — a staunch ally of ousted Labour leader Jeremy Corbyn, who has long been accused of antisemitism — tweeted on Tuesday, “Why is the Nazi holocaust more important? We all know the answer!! Because it’s white lives that matter duh!”

Her comment appeared in a retweet of an article by another Labour member expelled for antisemitism, Tony Greenstein, which claimed Western nations have concentrated on the Holocaust rather than the early 20th-century genocide in the Belgian Congo because it serves the interests of imperialism and capitalism.

“How is it that the Jewish Holocaust (because there are few books on the other victims — the Disabled, Gypsies, Russian POWs, Political Prisoners, Jehova Witnesses) has received such attention yet the genocide of Black Africans has not?” Greenstein asked.

“In these days of Black Lives Matter there is one, obvious, answer. White lives matter more,” he asserted.

Greenstein then minimized the suffering of Holocaust victims, writing, “Of course the industrial extermination of the Jews of Europe was, by any stretch of the imagination, horrific. But was death by gas or shooting worse than castration, chopping off of limbs, burning and skinning alive?”

“It took minutes to expire from bullets or cyanide gas,” he asserted, “whereas the tortures of the Belgian colonial sadists are unimaginable.”

…The group Socialists Against Antisemitism also weighed in, accusing Walker of constructing “a hierarchy of racism…”

Apparently, “diversity” isn’t really a strength for Jews either — acknowledging “Jews of color” and their “intersectional” oppression throws a wrench in the “white” Jews’ agenda of world domination.

“Black Jews” like Jackie Walker clearly see the obvious and hypocritical racial caste system among world Jewry — with the whitest-looking Ashkenazis at the top of the pyramid and Black Jews at the bottom.

But she clearly hasn’t yet figured out the key to the puzzle — that Jews are not White.

In fact, most “white” Jews recoil at identifying themselves as “White” —  because they instinctively know it’s an epithet that they use to divide and conquer their enemies — the unclean “goyim”.

And, no, the “Nazis” most certainly did not “gas” 6 million™ privileged “White people” who just so happened to wear funny little hats and go to synagogue on Saturday — that’s not the narrative.

These “white-passing” Jews enjoy the power and control they do in large part because of their success in selling their version of WWII to the world — featuring their incomparable and unrivaled suffering at the heart of it.

Blacks are allowed to obsess about their own real or imagined suffering and victimhood, but only as long as it’s at the hands of the White goyim — and as long as it’s NEVER compared to the suffering of Jews during their sui generis Holocaust™.