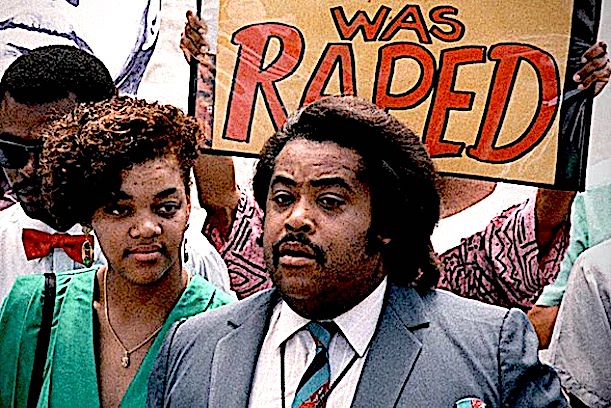 In an incident reminiscent of the Tawana Brawley hate hoax fabricated by race hustler Al Sharpton, a group of Black children in Grand Rapids claimed a 60 year old White man urinated on one of them:

A story about a white man urinating on a 5-year-old black child and calling her a racial slur was fabricated, Michigan police said.

Grand Rapids police and prosecutors late Friday said they determined the story was not valid and said no charges would be issued against a 60-year-old man arrested following the initial report on Wednesday.

Police said several children, all 7 or younger, were playing together sometime before 6 p.m. Wednesday when one of the children urinated on the 5-year-old girl.

Kent County prosecutors said the parents of the children, in talking with them, ultimately determined the children “concocted the story to avoid trouble.”

“We appreciate the conscientiousness of the parents in bringing the matter to the attention of the police, and continuing to ask their children questions as new evidence was obtained,” prosecutors said.

Prosecutors said the 60–year-old man had a “verifiable alibi” from other people who vouched for his whereabouts.

The allegations, when first reported late Wednesday, caused concern across the community and NAACP leaders on Friday said the incident should be considered both a hate crime and sex assault.

In the initial report, the children told police they were playing hide-and-go-seek along Courtney Street NW, just west of Tamarack Avenue, when a man urinated on the girl through a chain-link fence.

The suspect was a person who lived in the neighborhood and did odd jobs.

“The community and members of the media were understandably interested and concerned about the allegations, Kent County Prosecutor Chris Becker said.

“But this is a prime example of why it’s so important to wait until all the evidence has been gathered and the criminal investigation has been completed before jumping to any conclusions,” he said.

These young Black children have been raised to believe that the world is full of White racist boogeymen who urinate on innocent Blacks — thanks to how Hollywood portrays evil Whites in comic book simplicity.

Sure, my black children, Whites hate you so much they will pee on you through a chain link fence.

Most so-called “hate crimes” such as this one turn out to be hoaxes, but they continue unabated because it’s a way of achieving instant celebrity — and a possibility of winning the ghetto lottery if someone can be sued.

Until the incentive is removed, these fake stories will continue.  Make the reporting of a fake “hate crime” a Federal crime, and these stories will disappear very quickly.