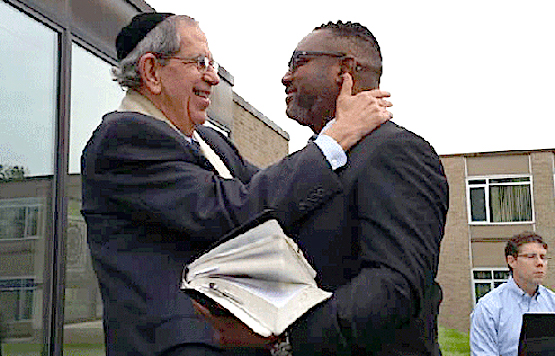 In the wake of the George Floyd Riots™ and looting, the Jewish Telegrahic Agency has published an essay by a Black “reverend” named Anthony A. Johnson who outlined a plan of how Jews in America can help Blacks end ‘White supremacy’ — a plan which apparently includes for Jews to stop ‘passing’ as White:

A lot of my Jewish friends are asking me how they can help and what needs to be done regarding the killing and lynching of individuals and families in the black community, most recently George Floyd…

Each and every day, each and every one of your black friends — including me — lives with the real fear of being killed by police officers. We’d like for Jews to help us end the killing of innocent blacks with the exact same fervor, dedication and commitment that you show toward preserving and defending your own families and communities.

My doctoral research shows that in America, while white Jews were once forced to assimilate to survive, the Jewish community has become one of the most financially successful religious groups in the country. I believe that the main reason white racists are killing blacks right now is because by and large, the black community doesn’t pose a credible threat to their economic security and personal freedoms.

I’m asking the Jewish community to use your political and economic power to help us dismantle institutionalized racism and end white supremacy, particularly in law enforcement, the courts and all of society in general.

I’m also asking you to be proud of who you are. If you wear a kippah, wear it loud and proud — my black is beautiful. And your black is beautiful. Stop trying to pass as white (to those who are white passing) and let yourself experience the “inconvenience” of being people of color (which is what you are) even if you’re a fair-skinned Ashkenazi Jew.

We know that there is power in numbers. The truthful acknowledgment of Jews as people of color will not only allow you to be your authentic selves, a people who protested and subsequently defeated Pharaoh, but it will cause a deep, transformational change in your hearts toward your black brothers and sisters, understanding the plight of blacks in white America. My friends, we may all be a different hue, but we’re all the same color.

It’s also critically important to denounce any racist friends that you may have and speak against the racist Hamans that you personally know. Break any business ties with racist whites and divest from any ventures and capital projects with those individuals or corporations you know who support racist activity and expressions, even if it means risking your own financial interests.

Finally, embrace blacks as absolute equals. In the words of the writer Benjamin Kweskin, “Be mindful that your diversity and inclusion isn’t just a euphemism for tokenism.” White racists view Jews (and all people of color) as the “N-word,” too. But the Jewish community has its own unique power to break the system of white supremacy in America…

We need each other. We can do infinitely more to bring about real justice, true freedom and democracy if we at last come together as one people…

This Black ‘reverend’ is completely daft if he thinks that Jews are going to give up their ‘white privilege’ — their ability to ‘pass’ as White — any time soon.

That ability to ‘pass’ as White is the secret to their success in amassing that much wealth and power among White Christian nations.

And the Jews are perfectly capable of undermining and destroying White nations (i.e., “White supremacy”) using their power and wealth without giving up their ability to be accepted as “White” or enlisting the ‘help’ of Blacks, so why do it?

According to A.E. Mourant in his authoritative hematological study of Jewish blood types, The Genetics of Jews (Clarendon Press, Oxford, 1978), all Jews indeed have between 5% and 10% sub-Saharan Black African genetic admixture.

And according to the Bible, no legitimate Israelite has any admixture — Black or otherwise — which alone proves that today’s Jews could not possibly be “God’s chosen people,” but as long as duped evangelical Christians believe this charade, why upset the apple cart to placate Blacks?

So, yes, even ‘fair-skinned’ white-passing Jews are indeed part Black — and many other ethnicities– but that’s what allows them to sit on both sides of the racial fence — where they can inflict the greatest damage to ‘White supremacy’.