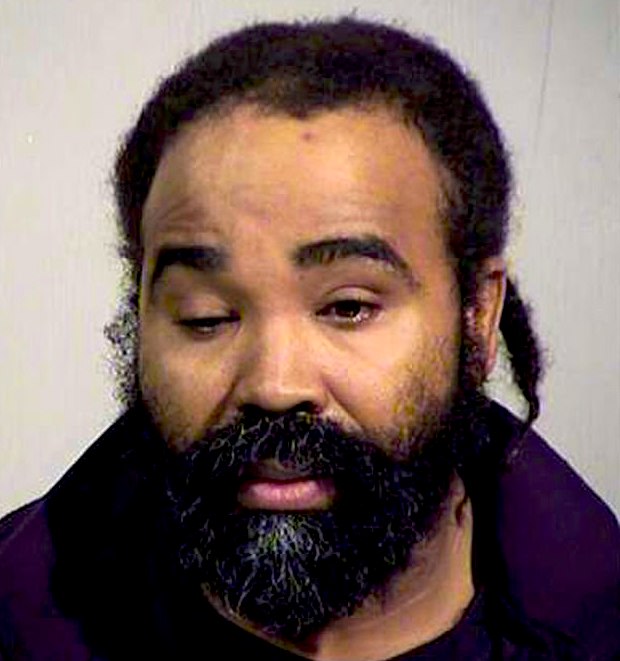 When an incapacitated patient in a nursing facility mysteriously gave birth last month, DNA samples from employees led investigators to arrest the rapist,  Nathan Sutherland, a Black male nurse whom the press describes as a “devout Christian“:

A male nurse arrested in Arizona on suspicion of raping a quadriplegic woman who suddenly gave birth despite being in a vegetative state for 26 years, appeared in court on Wednesday.

Nathan Sutherland, 36, is facing one charge of sexual assault and one count of vulnerable adult abuse after a DNA test identified him as the baby’s father.

The father-of-four did not enter a plea to the charges against him.

A Maricopa County Superior Court commissioner placed the recently divorced defendant on a $500,000 cash-only bail bond. He is being held in the Maricopa County Jail and his next court appearance will be January 30. If released, he would be placed on house arrest and ordered to wear an electronic monitoring device.

Wearing a T-shirt, athletic pants and a jacket, Sutherland was accompanied by defense attorney David Gregan, who said his client has no prior criminal record.

Gregan told the court there was ‘no direct evidence’ to suggest his client had committed the crime, but he acknowledged the DNA evidence obtained by police.

Sutherland – a Haitian orphan – has been a licensed practical nurse since 2011 and was directly responsible for caring for the victim at the Hacienda HealthCare Facility, according to police.

He divorced from his wife, Bridget Sutherland, last year. The motion was ordered on December 28, 24 hours before the birth of the victim’s child.

The defendant refused to answer investigator’s questions after his arrest.

Hacienda officials say Sutherland went through an ‘extensive background check’ before he was hired.

They added that he was terminated ‘the moment our leadership team learned of his arrest’.

‘Every member of the Hacienda organization is troubled beyond words to think that a licensed practical nurse could be capable of seriously harming a patient,’ the statement continued.

The lugen-presse is quick to point out that the rapist is a “devout Christian” for a couple obvious reasons: that it will automatically elicit sympathy for him from misguided judeo-Christians who will, no doubt, pray for his “salvation”; but it also will create a negative reaction to Christianity in general, which is even more desirable.  After all, if this is the profile of your typical “devout Christian,” then what exactly is the point of even being a Christian?  If Christianity does not have the power to deter a Black from raping an unconscious woman in a hospital bed, then what is it good for?

If we can learn anything from this story it should be that non-Whites will never understand Christianity nor are they capable of practicing it in their everyday lives.  When evangelical Christians attempt to bring Africans and the like into the congregation, they are essentially telling our society at large that these people should be living among us and should even be allowed to care for our most vulnerable members.  The Christian faith is not for everyone, and until we get that message straight, we will continue to read more stories about these psychopathic “devout Christians”.