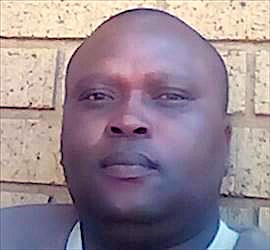 A South African court has found Velaphi Khumalo guilty of inciting racial violence for Facebook posts he made in which he claimed that Blacks should ethnically cleanse South Africa of Whites the way Hitler allegedly cleansed Germany of Jews:

The Equality Court has declared Velaphi Khumalo guilty of hate speech after he called on Facebook for the country to be “cleansed” of white people, in the same manner Adolf Hitler targeted Jews.

“The utterances of the respondent are declared to be speech prohibited in terms of Section 10(1) of the Equality Act,” ruled Judge Roland Sutherland.

He interdicted Khumalo from repeating the utterances and ordered him to remove all references to the utterances off any social media or other forms of public communication.

He must also write a letter of apology directed to all South Africans.

“The respondent shall within 30 days of the date of this order publish a written apology directed at all South Africans in which he acknowledges that the utterances were hate speech, that he was wrong to utter them, and undertakes never again to utter any remarks prohibited by Section 10(1) of the Equality Act,” ordered Sutherland.

Khumalo was also ordered to pay the complainants’ costs.

On January 4, 2016, amid a storm over comments made by estate agent Penny Sparrow, Khumalo posted:

“I want to cleans (sic) this country of all white people. we must act as Hitler did to the Jews. I don’t believe any more that the (sic) is a large number of not so racist white people. I’m starting to be sceptical even of those within out Movement of the ANC. I will from today unfriend all white people I have as friends from today u must be put under the same blanket as any other racist white because secretly u all are a bunch of racist fuck heads. as we have already seen (sic).”

He also typed: “Noo seriously though u oppressed us when you were a minority and then manje [now] u call us monkeys and we suppose to let it slide (sic). white people in south Africa deserve to be hacked and killed like Jews. U have the same venom moss. look at Palestine. noo you must be bushed alive and skinned and your off springs used as garden fertiliser (sic).”

If Khumalo had not brought the Jews into his anti-White genocidal rants, he probably would not have been convicted.  The Jews certainly don’t want South Africa Blacks to equate the plight of Whites to the alleged plight of Jews in WWII Germany.  That’s unforgivable, even for a Black who can’t spell.  Blacks need to understand that alleged jewish “suffering” is unique in the history of the world and cannot be compared to any other suffering, real or imagined.

Either way, Khumalo’s conviction won’t deter other Blacks from advocating the killing of Whites — their hatred of Whites is deeply ingrained in their psyche by the non-stop jewish propaganda on the media and in schools.  And this hatred and envy won’t stop until every last White person is either killed or chased out of South Africa. Then they’ll turn on each other.

We all know that hate speech laws have one purpose — to protect Jews from any criticism — and even Blacks will have to learn that lesson the hard way.