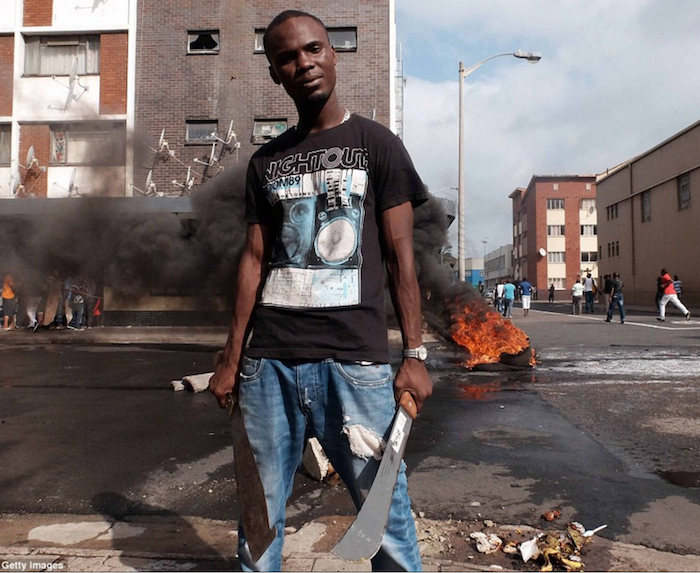 Black Africans that have moved into South Africa seeking a better life and better economic opportunities have been violently attacked by the xenophobic nationalistic Black South Africans:

Police battled to contain a wave of violence in South Africa last night as gangs of migrants armed themselves with machetes to fight off anti-foreigner attacks by locals.

Five people have died since vigilantes started looting and attacking shops owned by immigrants, mainly from other parts of Africa.

More than 200 immigrants had to take refuge in a police station and dozens of businesses were closed when trouble spread just a day after a rally against xenophobia in Durban.

Immigrants have complained about a lack of protection from the authorities and some have started arming themselves to fight back.

Eyewitnesses have claimed that the vigilante violence is carefully orchestrated and that minibuses have been ferrying men armed with knives and machetes around suburbs.

In the past two weeks, shops and homes owned by Somalis, Ethiopians, Malawians and other migrants have been targeted, forcing more than 2,000 to flee to camps protected by armed guards.

In Johannesburg, Malawian immigrant Samuel Idrssa described how his friend was stabbed and set on fire by a mob.

‘We wanted to rescue him but there were too many of them,’ he said. ‘It was shocking.’

He added: ‘We have all left our homes. Those affected are those of us who live in poor townships because we live with poor South Africans who do not have jobs.’

So far, five people are believed to have been killed in the violent protests which started two weeks ago in Durban, a key port on South Africa’s Indian Ocean coast, spreading to Johannesburg.

Violence flared days after Zulu King Goodwill Zwelithini said in remarks reported by local media that foreigners should ‘take their bags and go’.

In a recorded speech sent to a local broadcaster, he said: ‘We must deal with our own lice’ and complained about foreign-owned shops. He has since said his comments were misinterpreted.

Africa has a long history of Blacks raping, robbing, killing, eating, and enslaving each other, so it should come as no surprise that these new immigrants aren’t welcomed with open arms by other Blacks.  The Blacks in South Africa have no intention of sharing any of the land that they are going to be stealing from the Whites with the “wrong” Blacks from other areas of Africa.

Of course, you can call these Blacks “racist” or “xenophobic” until the sun goes down, and they will just laugh at you, and respond like most normal people would with a shrug, “Yeah, so what?”

Perhaps White people in America and Europe could learn from these “racist” Blacks how they can protect what is theirs — and not just hand it over to invaders who arrive with their hands out.