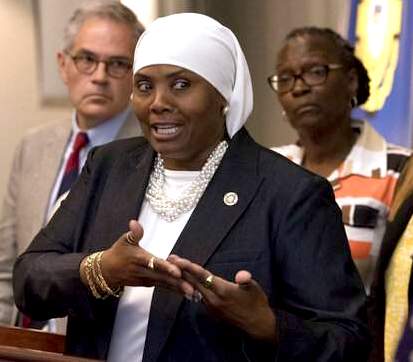 A first-year member of the Pennsylvania House on Monday offered a prayer laden with political and Christian imagery shortly before the swearing in of the chamber’s first Muslim woman:

“Jesus, you are our only hope,” Borowicz said during the prayer.

Borowicz delivered the prayer shortly before Movita Johnson-Harrell — the first Muslim woman elected to the General Assembly — was sworn in.

Johnson-Harrell said the prayer was “highly offensive to me, my guests, and other members of the House.”

“It blatantly represented the Islamophobia that exists among some leaders — leaders that are supposed to represent the people,” Johnson-Harrell said in a statement sent via text message. “I came to the Capitol to help build bipartisanship and collaborations regardless of race or religion to enhance the quality of life for everyone in the Commonwealth.”

Johnson-Harrell said she had 55 guests in attendance, 32 of whom are Muslim.

…Erik Love, a professor at Dickinson College in Carlisle, said the prayer reinforced the primacy of white Christianity in American public life and politics.

“The idea behind Islamophobia is that the U.S. or Pennsylvania is properly a white and Christian place,” Love said. “Christians are first-class citizens, and then Muslims are at best second-class citizens or are unwelcome.”

Given the context in which Borowicz’s benediction was delivered — on the day that the Legislature was to welcome its first Muslim woman representative — “it’s an attempt to reaffirm the idea that Pennsylvania is a Christian, white commonwealth and someone like Rep. Johnson is less welcome,” Love said.

“This was a mean-spirited, Islamophobic, anti-semitic, and xenophobic benediction which should have never been delivered in the statehouse,” said Jacob Bender, executive director of the Philadelphia chapter of the Council of American Islamic Relations (CAIR).

Bender said that Borowicz relied on “triumphalist” tropes that implied the supremacy of Christianity over other religions.

By saying that Jesus is “our only hope” and by willing “every knee” to bow to a Christian god, Borowicz delivered a message that excluded not only Muslims but also Jews, Sikhs, Hindus, and Native Americans who follow indigenous traditions, Bender said.

Religious leaders and lawmakers can craft respectful, interfaith benedictions if they focus on universal principles shared by religious groups — ideas like caring for the poor and needy, Bender said.

It’s hard not to notice, if you have the eyes to see, that this article cites the “expert” opinion of a pro-immigration Jew, Jacob Bender, director regional CAIR chapter.  The jewish support of CAIR was cited by Robert Bowers, the shooter of the Tree of Life synagogue in Pittsburgh, as a factor that motivated him to act.  Do the Jews at CAIR remind those Third World immigrants whom they are helping settle here, that America is a historically White Christian country?  Need we ask?

Americans and Europeans are now expected to tolerate Muslim calls to prayer in our towns and cities, but we are also expected to curtail our own Christian prayers in public for fear of offending the Jews and Muslims.  We are to accommodate them, but they are not expected to accommodate us in any way, and that hypocrisy is at the heart of multiculturalism and diversity.  Everyone has the right not to be offended by Christians, but the rights of Christians take a backseat to the rights of everyone else, including atheists.