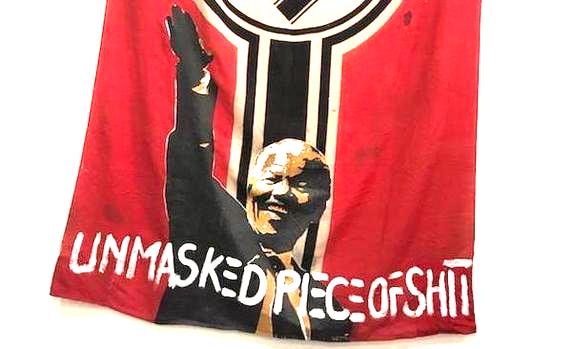 Controversial South African “artist” Ayanda Mabulu has created a portrait of Nelson Mandela in which he uses a German Nazi flag as a background to make a statement about Mandela’s failure to deliver on his political promises to Blacks:

Mabulu’s work, featuring Mandela giving the Nazi salute and the words “Unmasked Piece of Sh*t,” was briefly displayed at Johanesburg’s FNB Joburg Art Fair before being pulled. The Nelson Mandela Foundation called the work “deeply offensive” and said it is considering legal action against the artist, saying the work “goes beyond the reasonable limit” of freedom of expression.

Defiant, Mabulu told the BBC that “Mandela failed to deliver the dream” of equality, “and that makes him an equivalent of Hitler.” “I do not have anything to apologize for,” he stressed.

The artist’s shock piece prompted strong reactions among Twitter users. While some wholeheartedly agreed with the Nelson Mandela Foundation’s assessment, others agreed with Mabulu, accusing Mandela of betraying the anti-Apartheid cause and not touching the White minority’s disproportionately large wealth. The debate soon degenerated into an argument about Mandela’s origins, and his association with militants in the campaign against Apartheid in the 1960s.

Many users emphasized that Mabulu was an “attention seeker,” pointing to his previous controversial works, and urging fellow social media users not to get too carried away in their outrage.

Nearly a quarter century after the end of Apartheid, South Africa is in the grip of a new political crisis amid government efforts to expropriate land without compensation, with the campaign mostly targeting the country’s minority white farmers. The expropriation initiative, justified by the government as an attempt to make up for the legacy of the country’s discriminatory Apartheid-era laws, which enabled the country’s white minority to accumulate some 72 percent of the country’s farmland, have themselves been described as discriminatory. Some members of the white minority, which make up about 9 percent of the country, have warned that the land redistribution effort could lead to civil war.

Nelson Mandela was an anti-White communist and convicted domestic terrorist, and what his politics have to do with Adolf Hitler and the NSDAP is anybody’s guess.  The National Socialists had no policies to nationalize private property and give it to the poor — that’s what communists promise and often fail to do.  Perhaps Mabulu should have portrayed Mandela for what he was — yet another failed communist ideologue, like Leon Trotsky or Che Guevara, who made promises that were impossible to deliver.

What Blacks fail to understand is that their lives under Apartheid were as good as they would ever be — and the destruction of White rule and the “liberation” of Blacks merely threw them into social chaos: crime, unemployment, abject poverty, and disease, all of which they still blame on Whites and “the system.”  Hitler’s economic plan was based on the hard work and discipline of the German people, qualities clearly lacking in South African Blacks.