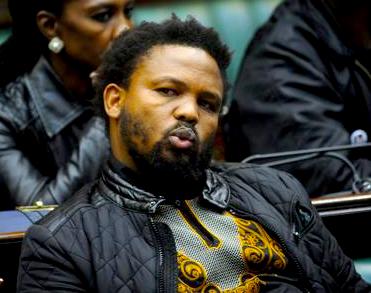 Black First Land First leader Andile Mngxitama is not back-peddling on his expressed contempt and hatred for White people in South Africa, and claims that  if he comes across any White person he wouldn’t hesitate to use his machete in a viral tweet:

The Citizen reported that Mngxitama told journalists that no court would stop the BLF from defending himself against “settlers”.

“No f**k*ng court is going to stop us from defending ourselves against settlers. They stole our land, they make us slaves, now today they are coming to take our dignity, and you believe we will not defend ourselves? That will not happen,” Mngxitama said.

There was a press release blamed “white monopoly capital via the SAHRC” for taking them to court, adding the case sought to have slogans the organisation uses, such as “Land or Death”, “by any means necessary” and “one settler one bullet”, declared hate speech.

Among those charged, apart from Mngxitama and the organisation itself, are BLF deputy president Zanele Lwana, national spokesperson Lindsay Maasdorp, deputy secretary-generals Tshidiso Tsimong and Zwelakhe Dubasi as well as treasurer-general Thandiswa Yaphi.

Virtually every Black voter in South Africa expects any Black political candidate and party to support “land expropriation” or theft from the White South Africans, and the reverse is also true: that Blacks who don’t advocate this land theft have no chance of getting support or elected.  President Ramaphosa is trying to assure White voters that this land “redistribution” program can be done peacefully and “legally”, while the “radicals” like Mngxitama and Malema want it done violently and quickly.

There is not enough money in the South African treasury to purchase this land from Whites at a “fair market value”, and so the only alternative to this outright theft without compensation.  Not only will the majority of Whites not be compensated for their property, they will be lucky to escape with their lives.  In terms of the Marxist dialectic, the purpose of Mngxitama is to make Julius Malema look like a “moderate” and Ramaphosa look like an arch-conservative.  In the end, Whites cannot trust or rely on any of them.