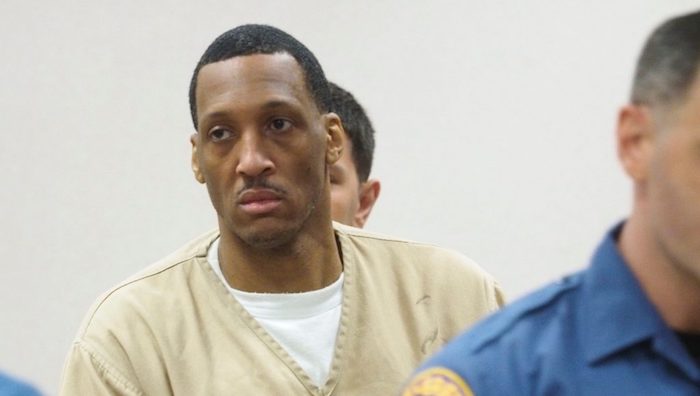 If we are to believe Blacks, our prison system is filled to the breaking point with innocent Blacks falsely accused of heinous violent crimes.  No matter how overwhelming the evidence against them, they will always claim they did nothing:

A man who forced couples staying in New Jersey motels to have sex at gunpoint, then locked the men in the bathroom and raped the women, was sentenced Thursday to 148 years in prison.

Authorities said that in March and April 2012, Rasheed Powell, 43, forced his way into motel rooms in Elizabeth and Linden, N.J. In each instance, Powell forced couples to have sex at gunpoint before ordering the men into the bathroom, New York’s FOX 5 reported.

While sexually assaulting the women, Powell demanded they compliment him loud enough for the men in the bathroom to hear, the Courier News of Bridgewater, N.J., reported. In each instance, Powell threatened the couples’ lives if they told anyone.

A joint investigation by multiple law enforcement agencies subsequently gathered enough forensic evidence to identify Powell as a suspect. He was arrested in mid-April at Springfield Municipal Court while responding to a traffic violation.

What’s remarkable isn’t that a Black man has committed yet another series of violent crimes, but rather that the police–no doubt hampered by affirmative action hirings–could not catch this rapist until he repeated the same crime multiple times.

If we had a White police force, not hampered by racial politics, this “man” would have been caught after his first rape–and he would have been executed, not incarcerated at taxpayers’ expense.