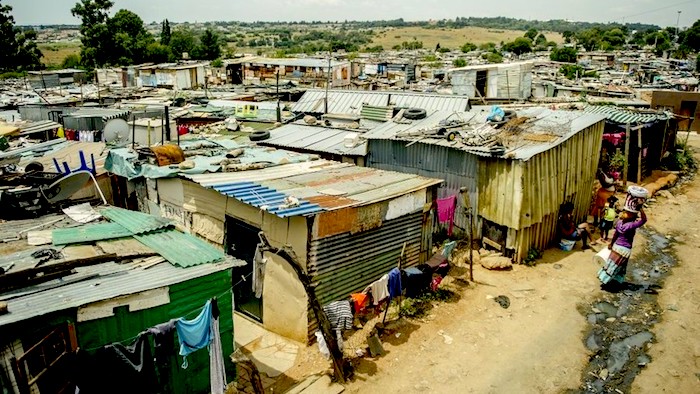 Blacks have been stealing White land for years, but local authorities in the city of Ekurhuleni have announced its first official “test case” of government-sanctioned theft:

Local authorities in the South African city of Ekurhuleni are set to begin expropriating privately owned land, without paying for it, as part of a national test case for the country’s controversial land reform program.

The city council approved an “expropriation without compensation” bill that had been pushed by ruling African National Congress (ANC) earlier this year, the Associated Press reports.

Nearly 600,000 of the four million people living in the city are reportedly stuck in an awful housing crisis due to the shortage of lands for building new homes. The land crunch is forcing people to stay in “informal settlements.”

“Our policy is not to take the land by force,” Ekurhuleni’s Executive Mayor Mzwandile Masina told the agency. “Our policy is to make sure the land is shared amongst those that need it.”

Masina, who heads the local ANC-led coalition, said that the city council would expropriate nearly 350 hectares of vacant land in the city limits, both private and government-owned. The city authorities are reportedly seeking to develop the lands in order to create new accommodation areas for people living in ramshackle dwellings. The top official did not specify which landowners will be hit by the measure.

“We are not going to expropriate land and keep it for ourselves,” the mayor said, stressing that people are currently having to live in conditions that are “horrible for human beings.”

The internationally debated land reform was approved by South Africa’s ruling party to address the historic injustices of apartheid, and distribute land among the population more equitably. According to the country’s President Cyril Ramaphosa, over 77 percent of South African farms and agricultural holdings are owned by white citizens with only four percent of lands belonging to black South Africans. White citizens make up just nine percent of the country’s population, while black citizens account for 76 percent.

Masina expects affected landowners to take the municipal authorities to court. However, the Ekurhuleni municipality hopes the case will force a ruling on whether expropriating land in the public interest is legal as the nation’s laws stand, or whether the constitution needs to be amended.

Whether the Black government steals the land and keeps it for themselves and their cronies, or whether they distribute it among the poor, the end result will be the same — everyone will finally be equal, or equally poor.  Blacks are impoverished because they are Black, not because of their lack of “opportunities.”

When Whites first showed up in the vacant land of South Africa, what “opportunities” were there for the Whites?  What schools?  Who was there to help them carve civilization out of the wilderness?  With no privilege besides their hard work and vision, they created an advanced civilization.  Why do Blacks need more than Whites to succeed?

Blacks need Whites to succeed at anything worthwhile.  Yet when Blacks succeed with the help of Whites, they claim they did it themselves.  You will never hear a Black say that they couldn’t have done something without the help they got from Whites.  Their pride has blinded them from the realities of their own incompetence.  Without Whites, South Africa will be transformed back into Black Africa where no one eats, but they starve on their own, proudly.