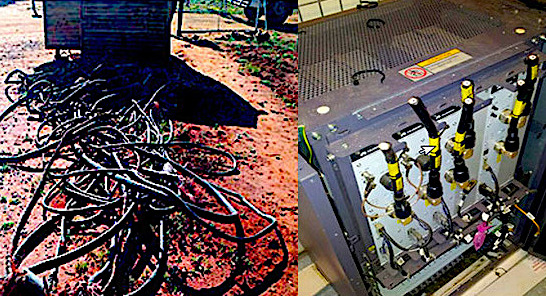 Due to the serious problem of theft and vandalism to cell towers, MTN, the largest cellular telecommunications provider in Africa, has permanently shut down 53 of its base stations across South Africa:

The operator said that while it has recovered stolen batteries to the value of almost R1 million, national cellular networks remain under heavy pressure from thieves and vandals.

MTN said the damage caused by thieves and vandals to its equipment is far exceeding the cost of repairing and replacing batteries and other hardware.

The network added that some acts of vandalism are so severe that hundreds of towers around the country are at risk of being permanently shut down, putting strain on the network and potentially diminishing the quality of its service.

“MTN data shows that as many as 89 cell towers across the country are currently on hold as they await replacement batteries and maintenance fixes,” the mobile operator said.

“But even worse, 53 base stations have been completely destroyed and have had to be terminated nationally – 39 in Tshwane and 15 in Johannesburg.”

MTN said that mobile operators have managed to front the costs of repairs and replacements so far, but they may need to be passed onto consumers if this problem continues.

The network added that many South Africans could also find themselves without network coverage as a result of this vandalism, especially considering the 53 base stations which have been destroyed by vandals.

“This situation leaves many South Africans without access to network services either because of downtime caused by repeated maintenance and repairs or in the extreme case of towers being terminated, where the regular theft and vandalism renders towers unsustainable,” said MTN network operations Ernest Paul…

This type of damage is not insured, and MTN said the cost to bring a cell tower back online after this type of vandalism can be up to R350 million.

MTN said it would do everything it could not to pass the cost of these repairs onto consumers, including offering rewards for information about these criminals.

The company is implementing detection and monitoring systems on all base stations, but Paul said that criminals are becoming increasingly brazen and disregard these deterrents.

“As soon as levels of collaboration and general awareness improve, criminal activity slows down,” said Paul. “We saw this in the recovery of R1-million worth of batteries in Pretoria this past weekend.”

MTN said it has already fixed 100 sites at a considerable cost, but Paul emphasised that cellular companies can’t solve this problem alone.

“We can win the war against battery theft if everyone works together,” he said.

In other words, Whites have to somehow convince Blacks that theft and vandalism is not in their best interests, but for the average Black with no employable skills or desire to work, it is in their interests to take and steal everything they can whether it’s nailed down or not.  Do these Black thieves really care that people will have to pay more for their cell phone service just because they steal these valuable batteries?

And when the cell phone towers collapse, the Blacks just burn everything down in sight.  And they are literally poisoning their own water systems just to bring the whole “system” down.

Why do you think Blacks always vote for the communists and socialists not just in South Africa but worldwide?  What exactly is so appealing to Blacks of a political system that takes the hard-earned wages of White taxpayers and gives them to people who have no desire or ability to work in an advanced culture that they didn’t create nor have the ability to effectively participate in without massive affirmative actions programs that guarantee their employment when they do chose to work?