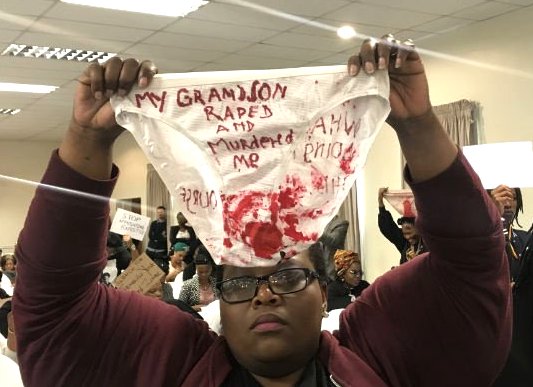 At the National Summit against gender-based violence (GBV) and femicide, South African President Cyril Ramaphosa gave lip service to feminist protestors, claiming that he will actually do something about this “scourge” of Black society:

“We have listened, and we hear you, there are two demands made by the #TotalShutdown protest that government has responded to, conducting a review of the national plan against GBV and constructing a revised plan against GBV,” Ramaphosa told delegates during his keynote address at the first-ever summit held at St George’s Hotel in Pretoria on Thursday.

“Minister of Women in the Presidency Bathabile Dlamini and Minister of Social Development Susan Shabangu are going to come forward with an action plan, together with civil society participation,” he added.

The #TotalShutdown movement during August, which is women’s month, planned a march across the country to highlight the plight of women and children in South Africa.

Ramaphosa, together with stakeholders, convened the summit in response to the #TotalShutdown’s demands.

As the President began his address, activists seated in the hall began a silent protest and held up underwear to demonstrate against the scourge of gender-based violence. The president continued despite the demonstration.

Ramaphosa acknowledged that South Africa is a country that is currently faced with high levels of violence and criminality.

“We cannot, should not, and will not stop until we put an end to this scourge. Our objective must be to bring these high rates to zero, we must aim for a femicide rate of zero per 100 000 women,” he said to a rousing applause.

The summit saw an emotional session of testimonies from GBV survivors who put forward proposals and solutions to the president who was accompanied by Justice Minister Michael Masutha.

“Today we are here as a result of activism born out of pain and anger to highlight the scourge of gender-based violence and femicide in our country. The proposals that have been put forward here, we are definitely going to act on,” he said in response.

Several testimonies highlighted the root of violence against women and children as a direct result of patriarchy. Activists in response requested that Ramaphosa create more awareness starting at home.

“Patriarchy means that men feel entitled to exert economic, social and political power over women. We need to put an end to patriarchy because it gives men a sense that they own women.

“When we improve the way we raise our children, we can go a long way in preventing violence against boys and girls,” Ramaphosa said in agreement.

Ramaphosa concluded by stating that there was no acceptable level of gender-based violence and government intended to eradicate it.

“We want to reach a point where no woman, child or man has to experience violence, violation or trauma of rape.

“Government is here. We are listening and let me add, I say yes to your demands,” he concluded.

Violence against women and children has been a way of Black life since the Earth cooled and the dinosaurs roamed the land.  To put an end to this tradition is clearly “racist” as it imposes White standards of morality and ethics on Blacks who have lived this way for eons.  To give false hope to Black women that one day they will be treated by their men like White women is cruel and sadistic.  Being victims of violence is an essential part of their identity, and to deny them that cultural vibrancy merely perpetuates the violence of colonialism.

Not only that, to impose jewish feminism on Black women makes no sense because traditionally there has never been a “patriarchy” in Black Africa to blame for their own problems.  It has always been the Black women who work and toil while the Black men sit around getting drunk and raping young girls and grandmothers.  In a real patriarchy, it is the men who work and run society, while the women stay at home under their protection and raise strong, moral, God-fearing families.  Clearly, no such arrangement has ever existed in Black “culture”.  Whatever Black male tribal “kings” there were merely sat around and did nothing except service their harems.

Ramaphosa should first be promising to create a patriarchy before he promises to fight Black women fight against one.