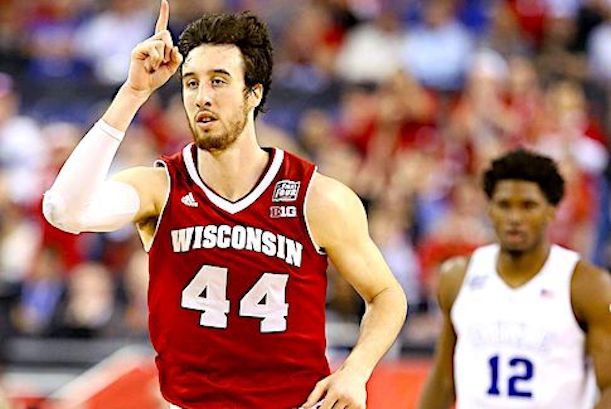 Despite the fact that Blacks dominate collegiate basketball and are the recipients of virtually every single award both nationally and at individual schools, when the University of Wisconsin decided to retire the jersey of their superstar forward Frank Kaminsky, Blacks on campus cried ‘racism’:

In April 2015, University of Wisconsin star forward Frank Kaminsky was named Associated Press College Basketball Player of the Year. Kaminsky, who had just led the Badgers to two straight Final Four appearances, became the first Wisconsin player to ever receive the award.

In February of 2018, Kaminsky was given the ultimate honor by the school – his number 44 jersey was retired and placed in the rafters, never to be worn by another Badger. In receiving the award, Kaminsky became only the second Wisconsin player to be so honored.

But this week, a local columnist took exception to Kaminsky’s award. Henry Sanders, [Black] publisher and CEO of Madison365.com, a publication that aims to “foster dialog between members of diverse communities,” argued in an “open letter” that the school’s honoring of Kaminsky suffers from a significant drawback:

Kaminsky is the wrong color.

“The only two players who’ve been given that honor in the 100-plus years of Badger Men’s Basketball are white,” Sanders notes in the open letter.

“What message do you think that sends to potential recruits and to past and current players of color?” Sanders asks.

“As a person of color, whenever I go into a building, a business, or a school, I look to see whether or not I’m reflected,” Sanders writes.

When he’s at a Badger game, Sanders stands in a place that has reserved its loftiest honor for those who earn the game’s highest achievements. By the luck of the draw, those two people happen to be white.

In fact, only seven of the past 30 winners of the national player of the year award have been white – Kaminsky winning the award is an anomaly. One can only imagine the outcry if a white fan decried the lack of “representation” at a school where all the retired jerseys belonged to African-American players.

The other retired jersey, incidentally, belonged to Albert “Ab” Nicholas, a millionaire businessman and former Badger player who donated tens of millions of dollars to the school, including for construction of the Kohl Center, where the team now plays.

Nicholas played for the school in the early 1950s, earning second-team All-American honors. He died in 2016. (Nicholas is mis-identified as “Nichols” in Sanders’ piece, demonstrating that retiring jerseys may not be the best way to keep one’s name fresh in the minds of fans.)

The school only began the practice of retiring jerseys in 2017, when Nicholas was posthumously honored. Kaminsky’s ceremony came a year later – so it is not as if the school has refused to honor black athletes for decades – it just so happens the two most accomplished players in school history, and thus the first two to be honored, were white.

At what point is basketball ‘diverse’ enough?  Of course, 100% diversity equals 0% White people, and as long as there are any White basketball players left, Blacks are going to feel ‘discriminated against’.

Their intention was just to get their fair share of representation in sports — no, it was to have it all, even if that means destroying it in the process.

Of course, none of these basketball players belong on any college campus, perhaps with the exception of the historically Black colleges, but no one is allowed to talk about that.

After all, if Blacks had to truly earn their way academically into a university before they could make the basketball team, every basketball team would be White, like it used to be.

But to expect Blacks to compete academically on a level playing field with Whites is racist, but excepting Whites to compete with Black ringers on the basketball court is considered fair play.