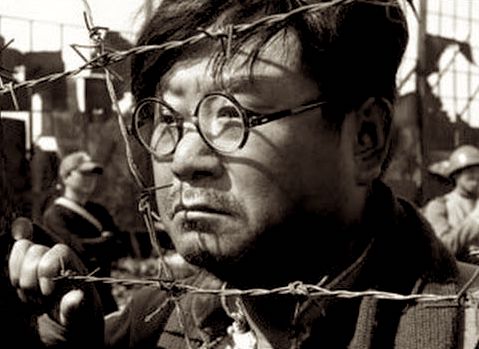 A review of three recent books on jewish anti-fascist activity in Hollywood during World War II reveals that a jewish advocacy group helped finger Japanese-Americans as ‘subversives’, which helped send them to the notorious internment camps:

Both books contextualize an era when, in the wake of Hitler’s seizure of power in 1933, Los Angeles was full of fascist supporters, and hundreds of local Nazi and allied “radical right” nativist and extremist “Christian” groups. All had in common the Nazis’ revulsion toward the Jews. Even before Kristallnacht, Los Angeles fascists defaced Jewish storefronts and organized “Buy Gentile/Boycott the Jews” campaigns that became a national model.

With studio money, Leon Lewis put together the Los Angeles Jewish Community Committee (LAJCC), whose public face was improving “community relations,” but also infiltrated the radical right with spies. They exposed Nazi diplomatic consuls up and down the Pacific Coast, and even a fascist Mata Hari named Leslie Fry. These were the masterminds of front groups like Friends of New Germany that morphed into the German American Bund, which even used the Hitler salute.

Local fascists practiced with rifles and “kike killer” bludgeons. They recruited some LAPD officers and California National Guardsmen. Among their innovative successes was planting a proclamation promising a “day of the rope” for prominent Jews in 40,000 home-delivered copies of The Los Angeles Times. These agents and subversives received orders from the Nazis via ocean liners docked at the ports of Los Angeles and Long Beach.

Dietrich Gefken, a veteran of Hitler’s 1923 Beer Hall Putsch, plotted to assassinate Hollywood  figures like Charlie Chaplin (the Nazis believed he was Jewish). These plots largely went nowhere, perhaps partly through the LAJCC’s undercover efforts to disrupt them.

After the outbreak of World War II in Europe and the attack on Pearl Harbor, the LAJCC established a private News Research Service that became a bible for Nazi hunters in and out of government and around the world.

Unfortunately, some LAJCC files identifying not only German nationals but Japanese people in the US as potential “subversives” were exploited in connection with the mass incarceration of Japanese Americans after Pearl Harbor. During and after World War II, the LAJCC increased its “community relations” work, and tried to make amends to the Japanese American community.

While many know about how Japanese-Americans were rounded up and put in internment camps in California during WWII, few people are aware that many American-born people of German descent were also rounded up and put in camps as “security risks”.  What we learn from these books written by Jews is that they were instrumental in identifying these “subversives” for the FBI to arrest and imprison.