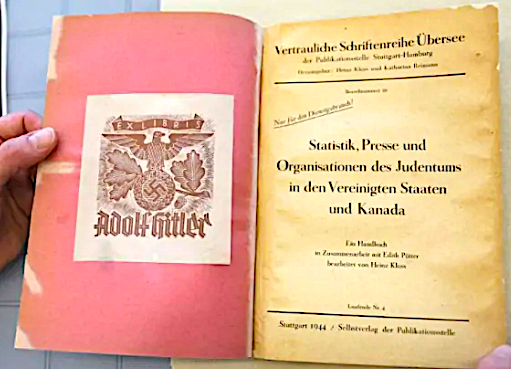 Based on an obscure statistical booklet allegedly from Hitler’s personal library, some jewish “historians” are now claiming that the Nazis planned to cross the Atlantic Ocean, invade North America, round up all the Jews and gas them as part of the so-called Final Solution:

Library and Archives Canada announced Wednesday it had acquired a rare 1944 book that once belonged to Adolf Hitler.

Written in German, “Statistics, Media, and Organizations of Jewry in the United States and Canada” is a 137-page report produced in 1944 by Heinz Kloss, a famed German linguist who had contact with US Nazi sympathizers.

The book details certain cities’ population statistics along with organizations and media outlets key at the time to North America’s Jewish communities, Library and Archives Canada said in a statement.

“This work hints at the story of what might have happened in Canada had the Allies lost World War II. It also demonstrates that the Holocaust was not a purely European event, but rather an operation that was stopped before it reached North America,” it added.

The bookplate bears an eagle, and swastika, and the words “Ex Libris Adolf Hitler,” indicating it was part of his personal library.

“It is fundamental … to acquire, preserve and make available documents no matter how controversial or contentious they could be,” said Guy Berthiaume, Librarian and Archivist of Canada.

Hitler was an avid reader with a collection reportedly containing 6,000 to 16,000 titles.

Library and Archives Canada said the book was likely brought back to the US as a souvenir of war, as in spring 1945 American soldiers took thousands of books from the Nazi leader’s second home near Berchtesgaden, in the German Alps.

The institution added it acquired the book from a reputable Judaica dealer, who obtained it as part of a collection owned by a Holocaust survivor.

Well, if this booklet came from a “reputable Judaica dealer” and a “Holocaust survivor” then that settles it; it must be legitimate.  And even if it really did come from Hitler’s library, there is no way to prove he actually read it, and even if he did read it, there is no way to prove that he was going to use it to keep track of North American Jews that he intended to exterminate somehow.  This is the kind of “research” that often passes as legitimate history when it comes to certain aspects of World War II.

And the message that we are supposed to learn from all this is that had Hitler not been defeated when he was by the Allies, the evil Nazis would have been kicking in doors in Canada and Detroit looking for Jews to round up.  Leave aside the fact that thousands of Jews lived openly in Berlin, Germany for the entire duration of the war, it’s unfathomable to believe that while fighting a two-front war in Europe, Hitler is fantasizing about killing Jews in Canada.  Be very, very afraid, especially Jews.