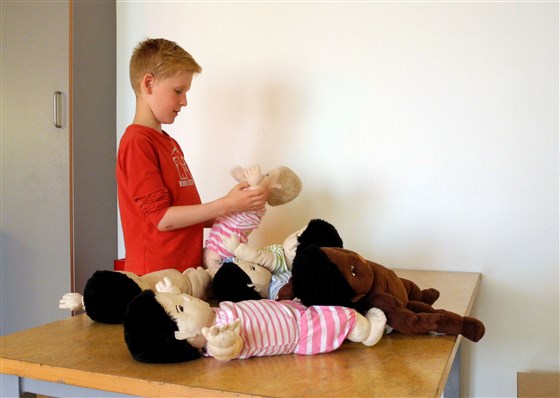 At Iceland’s most “progressive” elementary school, the children are kept separate by gender, with the boys forced to engage in traditional girl activities, while the girls are taught traditionally boy behaviors:

Elia climbed onto the table in front of her classmates. She threw her fists into the air and jumped on to the blue mats below.

“I am strong,” the 3-year-old said, her eyes alight with pride and exhilaration.

On the other side of this nursery school in the chic neighborhood of Laufásborg, boys were practicing having “gentle hands” by massaging each other with lotion.

Iceland is consistently ranked first in the world for gender equality. But the Hjalli teaching model, as practiced in the nursery school, is considered progressive even in Iceland.

Boys and girls are separated for most of the day and they actively compensate for their gender by practicing behaviors usually associated with the other sex: from being daring and taking the initiative to helpfulness and being considerate of others.

“The best way to get closer to equality is to admit the differences,” Ólafsdóttir said.

According to the Hjalli theory, by keeping the sexes apart, boys and girls are free to develop their personalities and discover their interests without the pressures and constraints of conventional gender roles and stereotypes. The toys at the schools are all gender-neutral and all of the children wear identical uniforms.

Ólafsdóttir, 60, believes that if children practice only the stereotypical gendered behaviors as society encourages, they risk slipping into what she calls the “blue” and “pink haze.”

Found at the two poles of the gender spectrum, this is where the natural strengths of each gender tip over into weaknesses, she explained.

According to Ólafsdóttir, girls’ sensitivity and caring natures can turn into self-pity and victimhood, while boys’ strength and power can become aggression or even violence…

“The dolls are only for the boys. The girls don’t need to practice this,” explained Cardew, who said she does structured gender compensation work in class about once a week depending on how much she deems it’s needed.

The teachers aim to strengthen boys’ empathy and caring natures. Meanwhile, the girls are taught to strengthen their courage and self-confidence by running barefoot in the snow without screaming or being direct about how they feel.

The only thing that this school will accomplish is produce more gender-confused — and homosexual — children and adults, which, in today’s climate, would be considered a success.  Society does not need girls with boy traits, nor would it benefit from the reverse.  If these reversals benefited us in any way, we would have discovered this thousands of years ago. We need boys who identify as male and girls who identify as female to create a beautiful harmonious balance which has been the basis of our society.

The only people who benefit from this blurring of gender lines are the jewish oligarchs who attempt to rule over society.  In the jewish “holy” book The Talmud, the “learned” rabbis identify at least 8 different “genders”, so we have a pretty good idea where this gender “confusion” comes from.

Jews play leading roles in the LGBT movement, and Jews were the among the very first to perform gender “reassignment” surgery.  They project their own gender confusion on the rest of us –and insist that we share their twist world view.  And now they want our children.