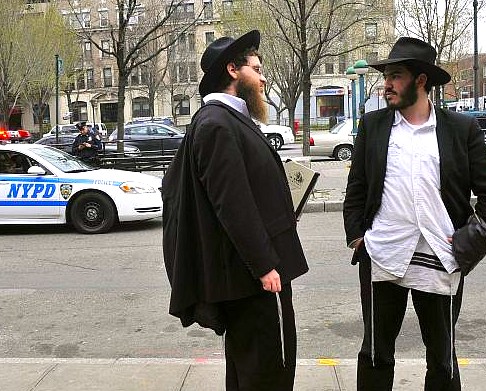 According to reports in local media, a 51-year-old Orthodox Jewish man was violently attacked by three men around 1 a.m. Wednesday morning. Police say the men approached the victim on President Street, and punched him in the face and body.

Less than an hour earlier, police say, a 22-year-old Orthodox man was attacked half a block away by three men.

“They didn’t say anything at all,” the victim of the first attack, who identified himself as Mendel, told the New York Post. “Next thing I know, I was on the floor — my yarmulke and glasses in the gutter somewhere.”

He said the assailants did not say anything to him or attempt to steal his wallet.

“It was just an attack of hate and anti-Semitism,” he said. “I guess ’cause I look identifiably Jewish.”

The New York Police Department believes the cases are linked, and so far has made two arrests. Reports said 18-year-old Navar Walters and 20-year-old Teshon Bannister have been charged with assault as a hate crime.

A third suspect remains on the lose.

The Anti-Defamation League has offered a $5,000 reward for information leading to an arrest and conviction in the case.

“We are sickened by this horrific violence, and increasingly alarmed by rising tensions in the community in the wake of similar incidents,” said ADL regional director Evan R. Bernstein. “These crimes are unacceptable, and they must stop.”

Chabad’s Rabbi Motti Seligson said that in the wake of the latest attacks, it was “time for a serious, and possibly, uncomfortable conversation about the face of antisemitism in America.”

“This happened last night in Crown Heights, not in Charlottesville nor at the hands of White Supremacists,” Seligson said in an Instagram post. “I’m told they stole nothing just brutally beat the guy in what is clearly a premeditated attack.”

There have been several assaults on identifiably Jewish victims in Crown Heights recently.

Last week, two residents were violently attacked on Kingston avenue by a group of teenage males.

The NYPD has reportedly assigned extra patrol cars and police foot patrols in the neighborhood in response to the attacks.

Here we have a new wrinkle in the “hate crime” propaganda — if a victim of an assault is “identifiably jewish,” then police must investigate the incident as a “hate crime” until proven that it is not.

So if you mug or attack someone who is wearing anything that outwardly identifies them as a Jew — say a yarmulke or a star of David — then regardless of why you committed the assault, you will also be charged with a hate crime.

This is how the Jews are abusing the system and “hate crimes” to get personal armed police escorts in the ghettos.

There has been a long history of racial tensions in Crown Heights between Blacks and Jews, including a number of violent attacks —  It’s a turf war, plain and simple, just like with Israel and Palestine, but when the locals fight back against the Jews, it’s called “antisemitism.”

The majority of Blacks see Jews — yarmulkes or not — as White people, and Jews have trained Blacks to hate White people on sight, so when Jews become victims of this type of targeting, they always cry “antisemitism” because claiming that they were targeted merely for being White will get no sympathy from their media sympathizers.