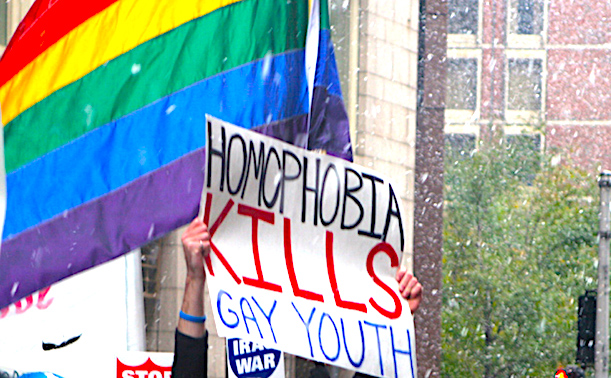 On Monday, the California state Assembly passed ACR 99, a resolution offering several opinions about the LGBTQ community and then concluding by asking religious leaders with “moral influence” to affirm homosexuality and transgenderism:

WHEREAS, The California State Legislature has found that being lesbian, gay, bisexual, or transgender (LGBT) is not a disease, disorder, illness, deficiency, or shortcoming; and

WHEREAS, Major professional associations of mental and physical health recognize that being LGBT is part of natural variations that occur in sexual orientation and gender identity, and recommend responsive services that foster self-acceptance and skills to cope with social stigma and discrimination; and

WHEREAS, Practices or therapies that attempt to create a change in a person’s sexual orientation or gender identity are often referred to as conversion therapy; and

WHEREAS, Some family, caregivers, and communities promote conversion therapy when a person is known or thought to be LGBT; and

WHEREAS, California law recognizes that performing conversion therapy on young persons is ineffective, unethical, and harmful; and

WHEREAS, Conversion therapy has been rejected as ineffective, unethical, and harmful by leading medical, mental health, and child welfare organizations in the United States; and

WHEREAS, The stigma associated with being LGBT often created by groups in society, including therapists and religious groups, has caused disproportionately high rates of suicide, attempted suicide, depression, rejection, and isolation amongst LGBT and questioning individuals; and

WHEREAS, The State of California has a compelling interest in protecting the physical and psychological well-being of minors, including LGBT youth, and in protecting its minors against exposure to serious harms caused by family rejection and attempts to change sexual orientation or gender identity; and

WHEREAS, In a pluralistic society, people differing along spectrums of political and religious perspectives share a common responsibility of protecting the health and well-being of all children and vulnerable communities; now, therefore, be it

Resolved by the Assembly of the State of California, the Senate thereof concurring, That the Legislature calls upon all Californians to embrace the individual and social benefits of family and community acceptance; and be it further

Resolved, That the Legislature calls upon religious leaders with conviction to counsel on LGBT matters from a place of love, compassion, and knowledge of the psychological and other harms of conversion therapy; and be it further

Resolved, That in addressing the stigma often associated with persons who identify as LGBT, we call on the people of California–especially its counselors, pastors, religious workers, educators, and legislators–and the institutions of California with great moral influence–especially its churches, universities, colleges, and other schools, counseling centers, activist groups, and religious centers–to model equitable treatment of all people of the state…

The “religious groups” being blamed here are clearly Christians, but they coyly avoid  stating the obvious so as to not appear to be singling out any particular religious denomination for persecution.

Of course, there is zero scientific evidence to support this preposterous idea that homosexuals commit suicide because Christians disapprove of their lifestyle.  However, a plethora of scientific studies have shown for over a 100 years that homosexuals suffer from much higher rates of psychological and emotional disorders.

And even though societal acceptance and “normalization” of homosexuality is at an all-time high, the suicide rates continue to climb.

A recent study concluded, for example, that a high percentage of children with “gender dysphoria” also suffer from autism, again, affirming the connection between mental health problems and sexual identity problems.  And while this current House Resolution isn’t legally enforceable, it is setting the stage for the next obvious step, which is to criminalize any criticism of homosexuality, even if that criticism is scripturally-based, effectively criminalizing aspects of Christianity.

You may think that’s fear mongering, but Christians have been thrown in jail in Bolshevik Canada for this ‘hate crime’ already.