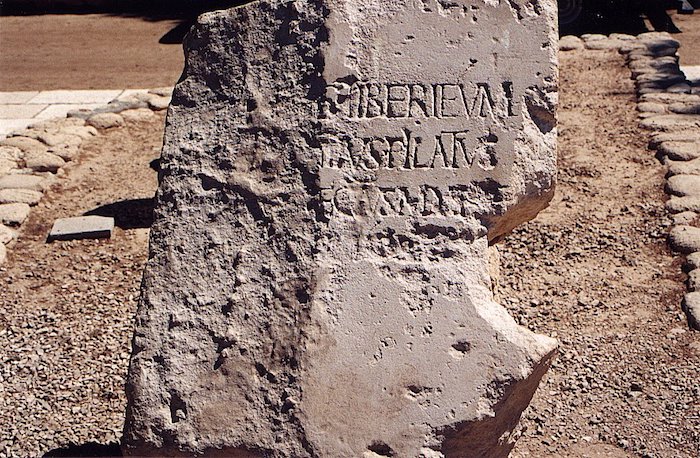 Historical skeptics had long doubted the biblical account of the trial of Christ presided over by a Roman governor named Pontius Pilate, whom they claimed existed only as a character in the Gospels–and in a brief hearsay mention by the Roman historian Josephus.  However, an archeological discovery of a Roman inscription in 1961 put all doubts about Pilate’s existence to rest:

[Our knowledge of Pontius Pilate] has now been supplemented by a significant Latin inscription discovered at Caesarea Maritima.

It was found by an Italian archeological expedition during its third season (summer, 1961) while excavating the Roman theater, situated in the southwestern corner of the city.

Sometime between A.D. 26 and A.D. 36 it had been set in the wall of the “Tiberium,” a public building (perhaps a temple) “given” or “dedicated” by Pontius Pilate in honor of Tiberius.5 Sometime later, probably in the fourth century, it was taken from the ruins of the “Tiberium” and employed as a landing for one of the stairways in the theater…

Translated into English this would read (literally):
“Pontius Pilate, prefect of Judea, has given (or has dedicated) to the people of Caesarea a public building (or temple) in honor of Tiberius.”

The Caesarea inscription is undoubtedly accurate in employing the technical Latin term praefectus.10 When we read the more general Greek term hegemon in Matthew and Luke, with reference to Pilate, we should understand that its technical Latin equivalent would have been praefectus, not procurator. Tacitus, writing much later (about A.D. 115), undoubtedly read back into the pre-Claudian period a technical Latin title that did not come into common usage until the time of Claudius and his successors.

Prof. S. Sandmel, author of the article on Pontius Pilate in The Interpreter’s Dictionary of the Bible, after discussing the references to Pilate in the writings of Tacitus, Philo, Josephus, and the New Testament, writes: “The base fact that Pilate was procurator in Jesus’ time, though it lacks direct corroboration, need not be doubted.” Archeology has now provided, in the discovery and reconstruction of the Caesarea inscription, the “direct corroboration” that Sandmel felt lacking.

What are the chances that four writers of the Gospels would all just make up the existence of Pontius Pilate–and then over the next 2,000 years never once be contradicted by any historical evidence to the contrary?  Given the plethora of historical information we have about ancient Rome, it would be unthinkable that a fictional character could survive this long without being exposed as a fraud.

If the New Testament were fictional, it would have been exposed as such a long time ago, especially during the golden age of archeology in the 19th Century, when Judea was gone over with a fine tooth comb.  But not one shred of objective evidence has come to light that contradicts any of the New Testament witnesses as to first century historical details mentioned in the Gospels.

That is a remarkable feat for a group of so-called uneducated fishermen.