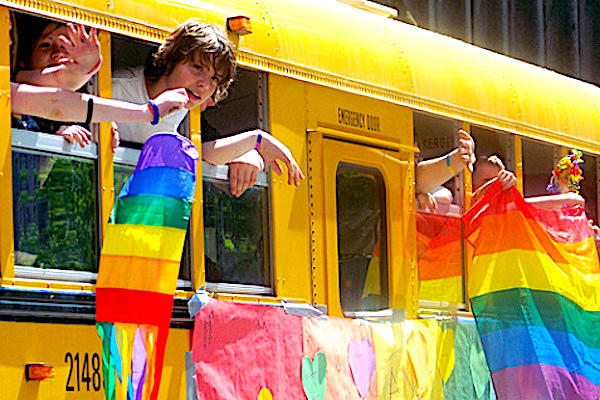 According to recently revealed position statements by the powerful California Teachers Association, it has become increasingly clear that it is maneuvering toward endorsing a new policy that would allow minor school-age students to receive hormone therapy to change their sex without parental consent:

On Jan. 26, the California Teachers Association (CTA) changed an existing policy to explicitly include transgender and non-binary youth among the students who can leave class without parental permission to receive birth control, abortions, and other such services.

While the updated policy does not include “hormone therapy” explicitly, the rationale discussed by CTA’s civil rights committee in making the policy change indicates that’s the final goal.

The policy now reads: “CTA believes comprehensive school based health care clinics are needed to bring caring and responsive services to young people. The clinics shall provide cisgender, transgender and non-binary youth equal and confidential access to decision-making rights for students and their families.”

The rationale behind this policy change was printed in a CTA Report of Board of Directors, Committees, and Items of New Business in June 2019.

The rationale states: “Current interpretation of California state law does not allow trans students to begin gender identity confirming hormone therapy without the consent of both legal guardians, however it does allow for cis minors to receive hormones (e.g. birth control) without the barrier of parental permission.

“This inequity of decision-making forces some children to go through the wrong puberty and can negatively impact the child’s mental health.”

Briggs told The Epoch Times via email regarding the new belief statement, “Teachers and others public school educators adopted this policy, belief statement, to ensure that all students have equal rights regardless of zip code, skin color, language they speak and who they love. The intent of the policy is not to circumvent parents or guardians.”

Currently, 57 clinics have been established on school properties in Santa Ana, Orange County, alone to facilitate this.

Another is AB 1266, approved in 2013, which states school employees are not allowed to inform parents about a child’s gender identity, unless the child gives consent.

Since the end of World War II, America has seen its public school systems become progressively Sovietized, as Charlotte Isyrbet proved beyond any doubt in her must-read book, The Deliberate Dumbing Down Of America.

An essential part of the strategy of bolshevik demoralization is to create a fake ‘generation gap’ between parents and children, alienating them from each other so that the ‘compassionate’ State steps in as the preferred parent.

Highly emotional, hormone-driven teenagers are low-hanging fruit for the nation-wreckers, which is why they are being targeted with their sex cult ideology and drugs.

The degenerate Bolsheviks who dominate Hollywood use the California government and school systems as their social incubators to ensure an endless supply of sexualized children for the pedophile elite.

And once parental consent is abolished for sex changes, the next ‘logical’ step will be to abolish all age restrictions for sexual consent, using Talmudic hairsplitting legalisms to justify it.

And the Kosher Mafia that’s running the show isn’t going to take ‘no’ for an answer.