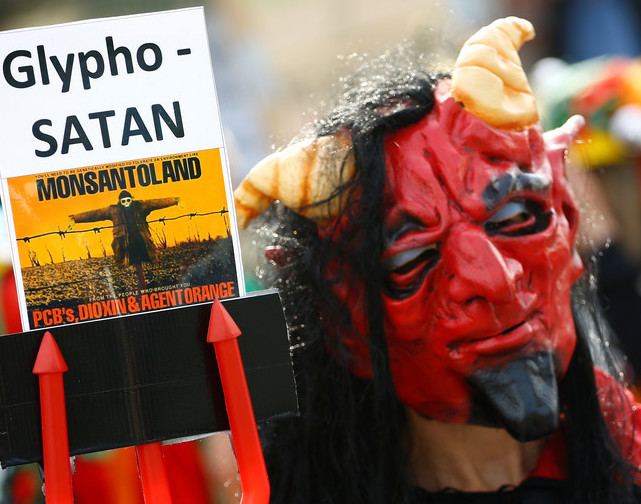 As Monsanto’s weedkiller, which contains the carcinogen glyphosate, is being outlawed in many countries around the world, ultra liberal and environmentally-conscious Canada has just announced that it believes it’s perfectly safe for human consumption:

The federal agency dismissed eight notices of objection and assertions made in the so-called Monsanto Papers in 2017.

“After a thorough scientific review, we have concluded that the concerns raised by the objectors could not be scientifically supported when considering the entire body of relevant data. The objections raised did not create doubt or concern regarding the scientific basis for the 2017 re-evaluation decision for glyphosate,” Health Canada said in a press release.

The 2017 re-evaluation determined that glyphosate is not genotoxic and is unlikely to pose a human cancer risk. It also determined that dietary exposure associated with the use of glyphosate is not expected to pose a risk of concern to human health. When used according to revised label directions, glyphosate products are not expected to pose risks of concern to the environment, according to the study.

Health Canada said it has selected a group of 20 of its own scientists who were not involved in the 2017 decision to evaluate the eight objections and the concerns raised publicly around glyphosate. The agency said its scientists “left no stone unturned in conducting” the review.

The agency noted that it “had access to numerous individual studies and raw scientific data during its assessment of glyphosate, including additional cancer and genotoxicity studies.” It added that it will “continue to monitor for new information related to glyphosate, including regulatory actions from other governments, and will take appropriate action if risks of concern to human health or the environment are identified.”

Glyphosate is the active ingredient in Monsanto’s Roundup, which is the most popular weed killer in the US. German chemicals and pharmaceuticals giant Bayer, which bought Monsanto last year, disclosed earlier that lawsuits from 9,300 plaintiffs were pending at the end of October. The lawsuits alleged that the company’s recently acquired weed-killing product caused cancer.

The surge in lawsuits followed the $289-million California court verdict when Monsanto was ordered to pay damages to a man who alleged its glyphosate-based weed killers, including Roundup, caused his cancer.

Bayer rejected all the accusations, claiming there are hundreds of scientific studies and regulatory authorities that show glyphosate, the compound contained in the weed killers, is safe to use.

Literally, the only way Roundup could possibly be declared “safe” for human consumption is that government watchdogs and regulators were paid off handsomely — or threatened with blackmail.  The evidence is overwhelming and conclusive that not only is glyphosate a carcinogen, but also its manufacturer, Monsanto/Beyer, knew that it caused cancer but marketed it to the public anyway.  There must be enormous financial and political power behind this lethal product, and to blame it on an inept bureaucracy is just as criminal.

It’s even more surprising that ultra-liberal Canada is greenlighting Roundup, considering how they like to portray themselves as environmental saviors who battle against the completely unscientific “global warming” fiasco.  Between unrestricted Third World immigration, including known terrorists, and now cancer-causing Roundup, it would appear that Canada’s leadership is literally hell-bent on utterly destroying its people.  This is surely driven by an intense hatred of the Canadian people, and they need to ask themselves what the source of this hatred could be.