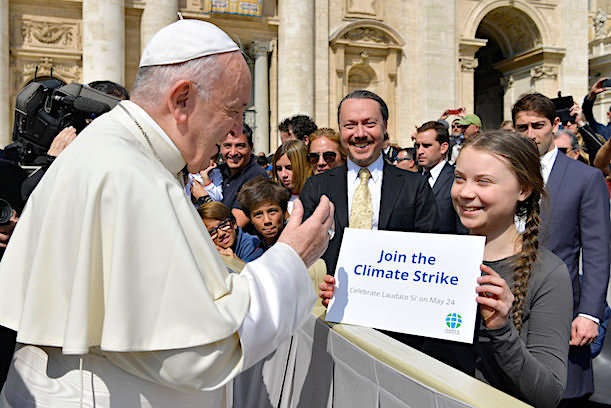 The Bishop of San Diego has made the case that “climate change” could be considered “uniquely preeminent in Catholic social teaching” since the potential death toll due to man-made temperature rise is “larger” than abortion and “threatens the very future of humanity”:

In a speech titled “Conscience, Candidates and Discipleship in Voting,” which Bishop Robert J. McElroy delivered at the University of San Diego yesterday, the bishop said that Catholic voters need to discern where their priorities lie in the upcoming 2020 election.

“Frequently in discussions of the application of Catholic social teaching to voting, the question is raised whether one issue has a unique priority among all of the other issues in its claim upon believers in the current election cycle. Some have categorized abortion in that way. Others, climate change. This question deserves deeper scrutiny,” he said.

The bishop went on to list four points that he said should be considered when setting priorities.

Against the backdrop of these two monumental threats to human life, how can one evaluate the competing claims that either abortion or climate change should be uniquely preeminent in Catholic social teaching regarding the formation of Americans as citizens and believers? Four points should be considered.

-There is no mandate in universal Catholic social teaching that gives a categorical priority to either of these issues as uniquely determinative of the common good.
–The death toll from abortion is more immediate, but the long-term death toll from unchecked climate change is larger and threatens the very future of humanity.
–Both abortion and the environment are core life issues in Catholic teaching.
-The designation of either of these issues as the preeminent question in Catholic social teaching at this time in the United States will inevitably be hijacked by partisan forces to propose that Catholics have an overriding duty to vote for candidates that espouse that position. Recent electoral history shows this to be a certainty.

It is unclear if any deaths in the U.S. have resulted from “climate change.” Abortion, however, has taken the lives of over 60 million in the U.S. alone since 1973. In the last 100 years, there have been over one billion abortions worldwide.

This bishop clearly has political ambitions in the Catholic Church, as the Pope himself has been trumpeting the ‘global warming’ hoax for years now, and all priests are now expected to promote this issue with their congregations.

The Pope is an obvious change agent to radically move the Catholic Church into far closer alignment with the agenda of the jewish New World Order, and ‘global warming’ is being used to bring that about.

And the Rothschilds have sent a clear message: you will help combat global warming if you know what’s good for you.

The Catholic Church’s new agenda, outside its obligatory anti-abortion stance, is now virtually indistinguishable from Antifa and its army of social justice Bolsheviks advocating the abolition of private property, national borders, and traditional families.

No wonder White people are leaving the Church in huge numbers while virtually all its new ‘converts’ are coming from the Third World, especially Asia and Africa, where communism still has great appeal.